A Granite Falls man who was convicted of a felony for barging into a man’s home and beating him had his conviction overturned by the N.C. Court of Appeals.

Because of rulings made by the Superior Court judge in the case, Zachary Dallas McDaris, 25, can be convicted only of a misdemeanor, the appeals court said.

McDaris was convicted last August of first-degree burglary in a break-in at the home of Roy Michael “Mike” Ridenhour, 63, of Lake Park Drive south of Granite Falls. McDaris, who has said he had been drinking heavily at the time and does not remember the incident, went to Ridenhour’s home about 1 a.m. on Jan. 1, 2018, and banged on his door. When Ridenhour answered the door, McDaris told him, “I’m your savior. You’re going to hell for your sins,” forced his way into the house, and the two struggled. At one point McDaris rammed Ridehour in the chest and knocked him down a stairwell into his basement, where he landed hard on the cement floor and was knocked unconscious.

In a ruling issued on Tuesday, the Court of Appeals said that Judge Daniel Kuehnert made a mistake when he denied a request by defense attorney Joe Delk IV to dismiss the burglary charge.

In order to be convicted of first-degree burglary, a person has to break into a residence with the intent of committing a felony or a larceny inside.

Delk argued that prosecutors could not prove that McDaris intended to commit a felony or steal anything, and therefore first-degree burglary was not the correct charge.

But Kuehnert agreed with Assistant District Attorney Andrew Jennings, who argued that the felony McDaris intended to commit was breaking and entering with intent to terrorize or injure. Kuehnert found McDaris guilty of first-degree burglary and sentenced him to six months in prison and five years of supervised probation.

But the appeals court said that the reasoning makes no sense because the breaking and entering charge must be distinct from the crime that the person intended to commit once inside the house, so it would mean that McDaris broke into Ridenhour’s house with the intent of breaking into another house inside.

The ruling indicated that McDaris could have been charged and convicted of breaking and entering with intent to terrorize or injure, but there was no basis for first-degree burglary.

The court reversed McDaris’ conviction and sent the case back to Caldwell Superior Court for McDaris to be sentenced on a charge of misdemeanor breaking and entering.

Delk said Tuesday that McDaris’ conviction had bothered him.

“We’re relieved the Court of Appeals agreed that he shouldn’t have been convicted of … first-degree burglary,” he said. 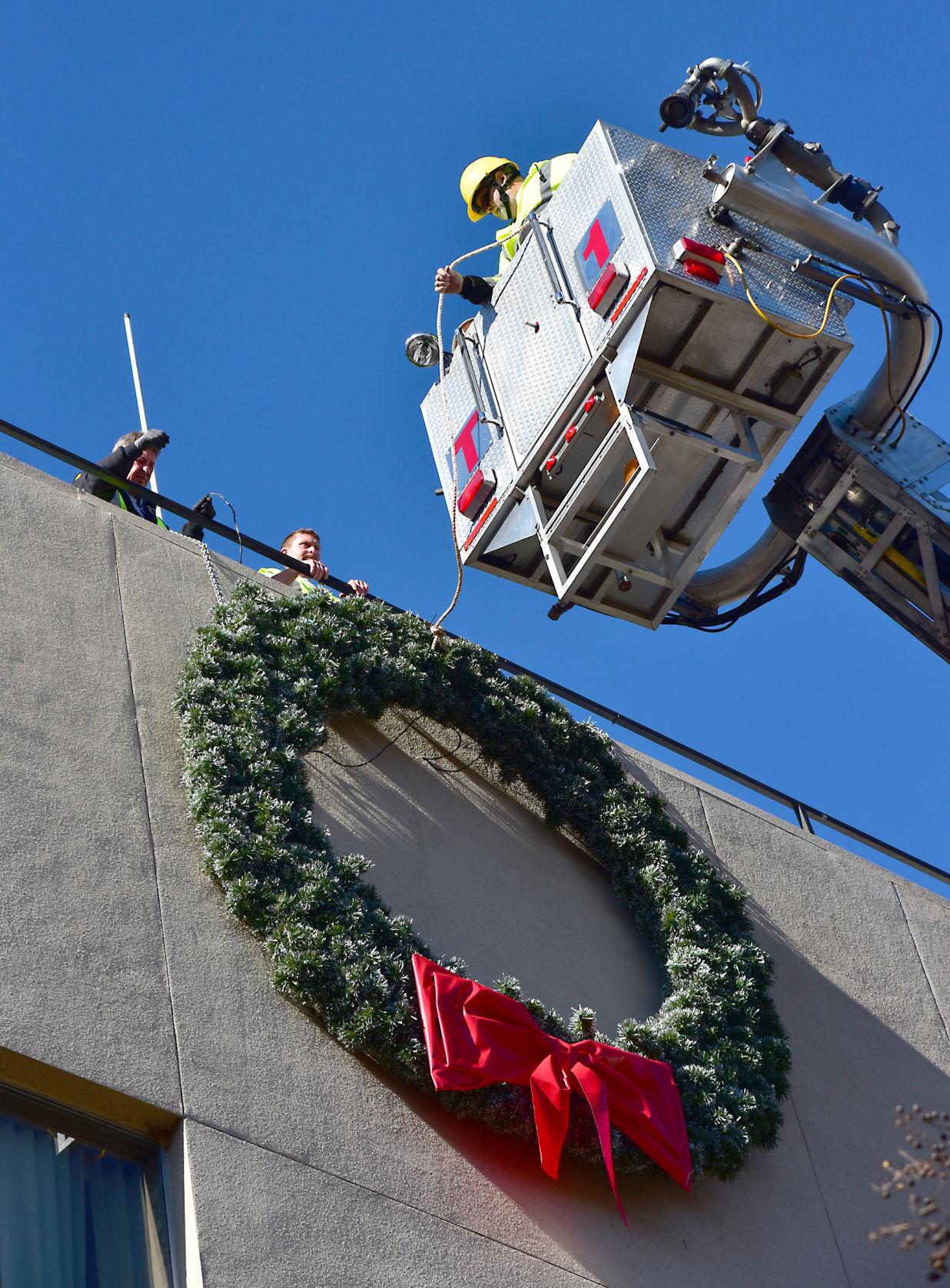 Above: Lenoir city worker Duke Moore works from an

A resolution the Caldwell County Board of Commissioners approved Monday night asks the North Carolina General Assembly to pass a local act to make the county’s school board elections partisan, which means requiring all future candidates to appear on the ballot as a member of a political party.

“We believe candidates become members of political parties because the party represents the essential views of the candidate toward government and toward public education,” the resolution read. “We support transitioning to partisan Board of Education elections because it will be an effective way to bring more of the electorate into the process, and will increase voter awareness about the candidates.”

Candidates wishing to run without a party affiliation could not appear on the ballot unless they gather signatures from at least 4% of the county’s registered voters, according to state law.

The resolution was suggested by Commissioner Donnie Potter, who said he had been approached by multiple people this year asking why Caldwell school board candidates didn’t list their party.

“I actually thought that all school board races were nonpartisan statewide until people started asking and I started digging into it,” he said.

Currently, 39 of the state’s 114 school districts have partisan elections for the school board. That is up from just 14 in 2010, according to data from the Education Week Research Center.

“I personally feel like people need to know who they’re voting for,” Potter said. “I think it’s just another small way to educate the public, and I think people want to know, and so they ought to know.”

But Potter also said he recognizes that partisan politics have created a shift in the way people interact with one another, sometimes in a negative way.

“I know guys who have lost their best friends because they disagree politically,” he said.

He said that growing partisan discord is starting to drown out the majority of Americans, who he thinks tend to be more moderate. He acknowledged the apparent contradiction in what he was saying, and he said it’s a part of holding office.

“If you ask Donnie Potter personally, I don’t care either way,” he said. “But when you have people coming to you all the time asking you about (how to change the way candidates file), then I think the motivation to change is that voice of the people. People want to know and they want to know what platform somebody is affiliated with.”

Before the resolution was drafted, Potter reached out to members of the current school board and asked their opinion. He said that two, Duane Knight and Darrell Pennell, said that they would prefer elections to remain as they are, but the other five were open to the idea.

At Monday’s meeting, two members of the public spoke against the resolution.

Amanda Bregel, who teaches English at Caldwell Early College High School and is the president of the Caldwell County chapter of the NAACP, said she doesn’t believe partisan politics have a place in the school system.

Bregel, who ran in 2018 as a Democratic candidate for the North Carolina House of Representatives, admitted to her own personal party allegiance but said that she believes it’s her and her colleagues’ duty to leave personal opinions outside of the classroom.

“The front door of my classroom says, ‘Amanda Bregel — English.’ I am not a Democratic teacher, I am not a Republican teacher, I am just a teacher,” she said. Teachers “don’t focus on politics… we focus on what’s best for the kids, and that’s how our school board members should be, too.”

Barbara Kirby of Hudson said that the resolution wasn’t publicized enough for a decision that would affect so many people.

“Making school board elections partisan is an issue that a lot of people in the county likely have an opinion about,” she said. “So slipping it into the consent agenda as the last item at the last minute is cowardly and reprehensible.”

At most public meetings, the consent agenda is adopted as a unit and contains routine items requiring action from the board but not triggering much discussion. The board did not discuss the resolution in detail Monday night. The resolution was not read aloud but can be viewed in full in the Nov. 16 meeting agenda packet, which can be found at www.caldwellcountync.org/administration/meeting-agendas.

Board chair Randy Church said that the decision to put the issue on the consent agenda was one of expediency because there were two public hearings scheduled that night and the board wasn’t sure how long they would last.

“It was just a resolution that we’ve adopted to send over to the state for them to have consideration,” he said. “It’s not a done deal.”

To make a change to specific local elections, a member of the General Assembly has to introduce a bill, said Leanne Winner, director of governmental relations for the North Carolina School Board Association. If the bill becomes law, it will be considered a local bill and will affect only the specific county or counties mentioned. The governor does not have the ability to veto a local bill unless it affects more than 15 counties.

A new statewide alert system shows county-by-county the rising levels of COVID-19, identifying the counties with the highest levels of community spread.

Gov. Roy Cooper announced the system Tuesday afternoon, saying that the state now has the highest rate of COVID-19 hospitalizations since the pandemic began.

“These are numbers we cannot ignore,” he said.

The new COVID-19 County Alert System, which identifies the state’s viral hotspots, uses three metrics to designate counties as yellow, orange, or red — in yellow counties, there is “significant” spread, in orange, it is “substantial,” and in red it is “critical.”

Dr. Mandy Cohen, secretary of the North Carolina Department of Health and Human Services, said that since no metric presents a complete picture of the virus in North Carolina, the state is using a combination of three metrics to categorize counties.

The first metric used is case rate, adjusted for the population of the county. What’s counted is the number of new cases in 14 days per 100,000 people, and it is the same measure that the White House Coronavirus Task Force uses to compare counties and states.

The second metric is the percentage of coronavirus tests that are positive, and the third measures the impact on local hospitals. It is a composite score based on the percentage of hospitalizations that are for COVID-19; the number of COVID-19-related visits to the emergency room; the numbers of hospital staff; the number of open hospital beds; and whether there are critical staffing shortages over a two-week period.

Caldwell County is considered an orange county. The case rate is 416.2 per 100,000 people, the most recent two-week positivity rate is 7.6%, and the impact on Caldwell Memorial Hospital is considered “moderate,” a more severe rating than most counties in the state received.

Forty-two cases were reported in Caldwell on Tuesday, bringing the county’s total number of confirmed cases to 3,104.

While Caldwell County is in the orange category, neighboring Alexander, Wilkes and Avery counties are all red. Alexander County has the highest 14-day case rate in the state, at 914.7 per 100,000 people, and its positive test rate is 16.8%.

Cooper said that in North Carolina, 3,288 new cases of COVID-19 had been reported since Monday, with 1,501 people hospitalized and 4,852 who have died. He said that there is widespread virus transmission across the state.

“By pinpointing counties with high virus transmission and asking everyone in those counties to work with us … we can succeed,” Cooper said.

While he didn’t impose any further pandemic-related restrictions on Tuesday, he said that if the numbers keep moving in the wrong direction, the state could impose additional orders at either the local or statewide level.

The North Carolina Department of Health and Human Services recommends that people counties in the 'orange' tier, which includes Caldwell, do the following:

· Limit mixing between households and minimize the number of people in your social circle.

· Consider ordering take-out from restaurants or, if at a restaurant, eating outdoors while social distancing.

· Individuals who are high-risk for developing serious illness should consider staying at home as much as possible.

· Reduce your public interactions to mainly essential activities, like going to work or school, caring for family members, buying food, getting health care, or picking up medications

The department also suggests businesses and community organizations do the following:

· Colleges and universities should adopt strict restrictions on student gatherings and events on-campus and off-campus and close indoor dining, moving to grab and go.