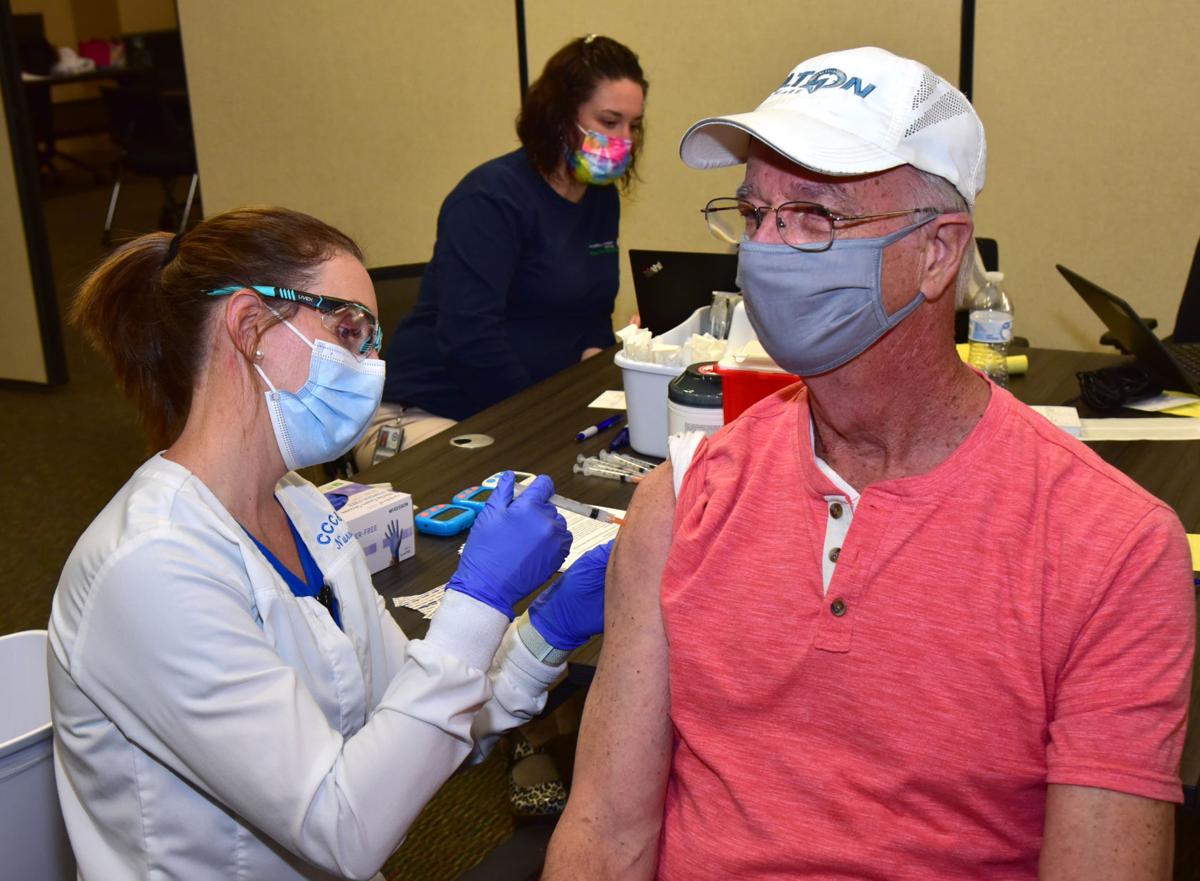 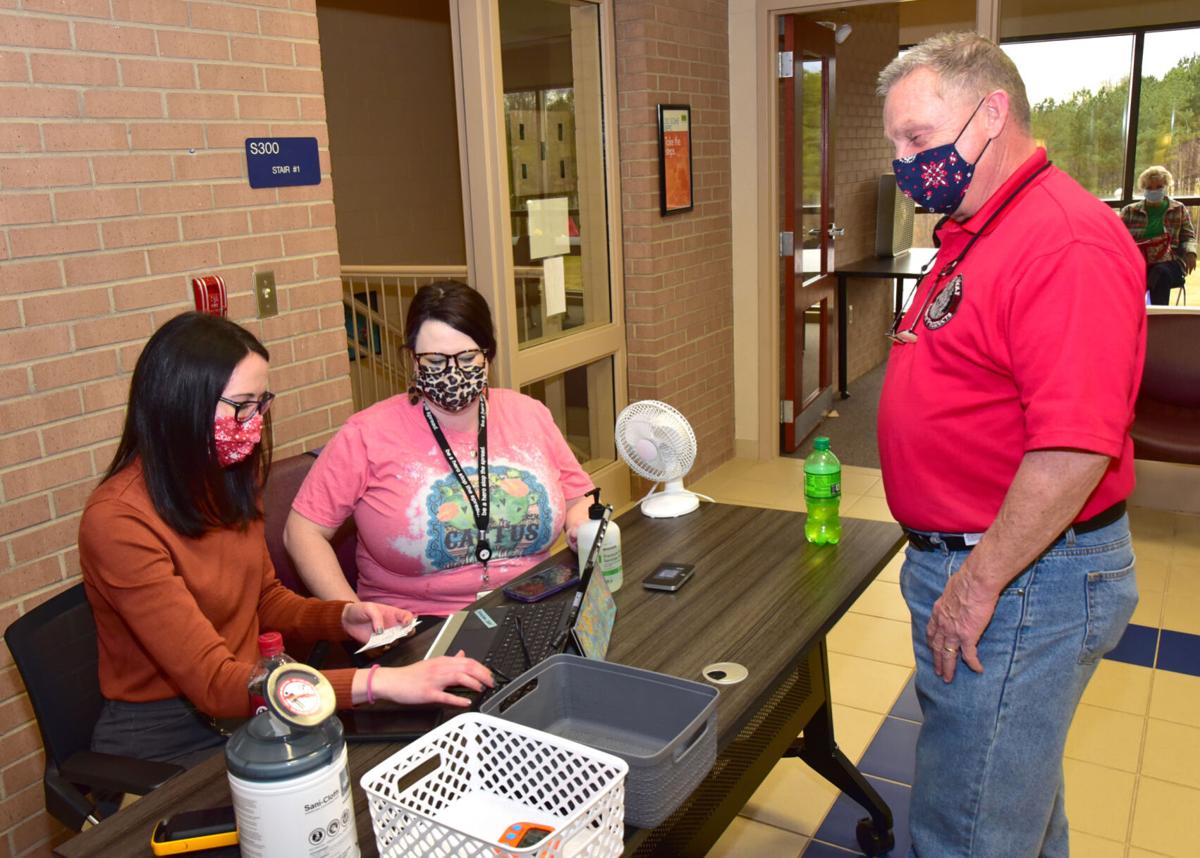 Randy Roper, right, sets up an appointment for his second COVID-19 shot after getting his first one Thursday. Taylor Hoover, left, and Brittany Raby both work at the Caldwell County Health Department. 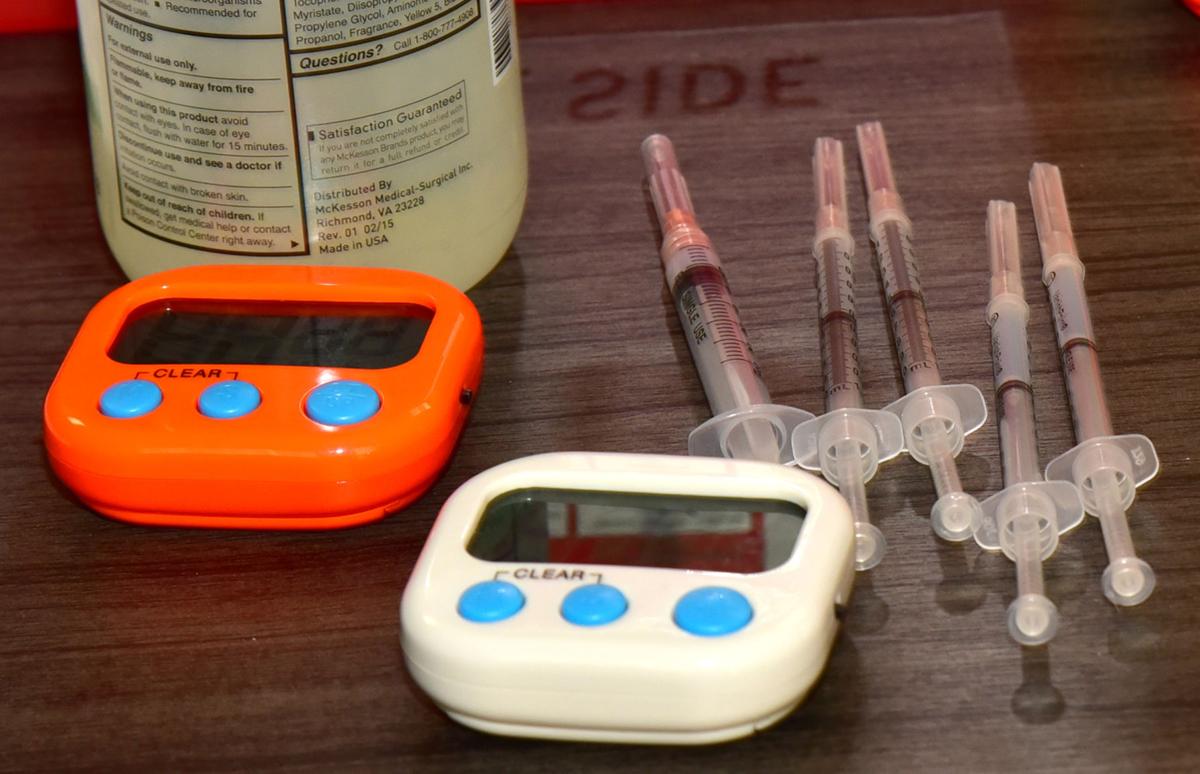 Syringes and timers sit ready for vaccinations at the Caldwell County Health Department.

Randy Roper, right, sets up an appointment for his second COVID-19 shot after getting his first one Thursday. Taylor Hoover, left, and Brittany Raby both work at the Caldwell County Health Department.

Syringes and timers sit ready for vaccinations at the Caldwell County Health Department.

The Caldwell County Health Department has run out of first doses of the vaccine against COVID-19, and county officials say that they are not sure when they will receive more from the state.

People already scheduled to get their first dose are now being rescheduled for appointments in mid-February.

County Health Director Anna Martin said she has spoken with other health directors, and they have reported that supplies are limited statewide.

“It’s frustrating, but it’s more frustrating for the public, because we want people to have that vaccine. And we planned everything. We have a good flow, but the demand is higher than what we are able to do right now,” Martin said.

Paige Counts, the county’s public information officer, said that the Caldwell County Health Department’s waiting list has more than 8,200 people on it, and more people sign up by the hour.

Since Jan. 2, the health department has administered more than 1,650 initial doses of the vaccine. The department has enough supply to provide the required second dose to people who have already received the first.

The change caused officials to have to reschedule hundreds of appointments for people who were supposed to receive their first dose, Martin said.

The vaccine clinic was bustling Thursday.

Counts said that the health department is easily receiving more than 1,000 calls a day from people asking about the vaccine.

“I think the field hospital (Samaritan’s Purse set up to help handle COVID-19 patients), I think the increase in cases, I think those factors have made this hit home. That it is real. And to be honest, I didn’t know what to expect when we started talking about a vaccine,” Counts said. “I did not know what the interest would be. But our waiting list really started from people calling based on word of mouth. … It really was a grassroots thing, … and it grew very quickly.”

A spokeswoman for the N.C. Department of Health of Human Services said that the state finds out from the federal government once a week how much of the vaccine the state is being allocated. She said she didn’t know why Caldwell County wasn’t immediately receiving more.

“We are asked to run out. They don’t want people sitting on 1,000 doses while someone else has zero,” Easton said.

She said that Caldwell UNC Health Care officials expect to use up their available supply of vaccine by Monday but expect to receive additional doses from the state on Tuesday.

“We’re kind of organized to take care of about 500 people a day. If we get supply from the state that exceeds that, we will definitely share that with the county. I’m really proud of them for setting up a system to see a large number of patients, and so we want to support them. If we get any greater than our system can provide, we will share with them,” Easton said.