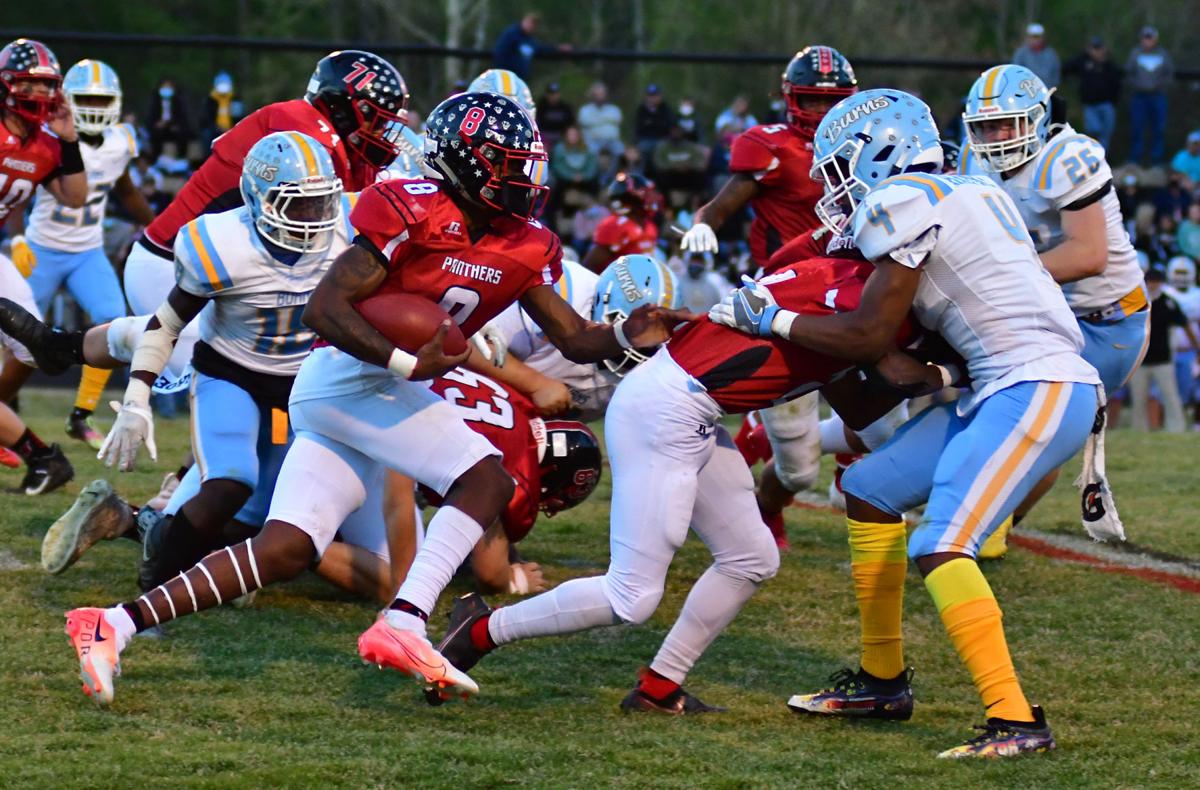 Hibriten’s Daren Perry (8) looks for a hole to open during Friday night’s 2AA playoff game against Burns in Lenoir. Perry was held to 47 yards rushing on 24 carries. 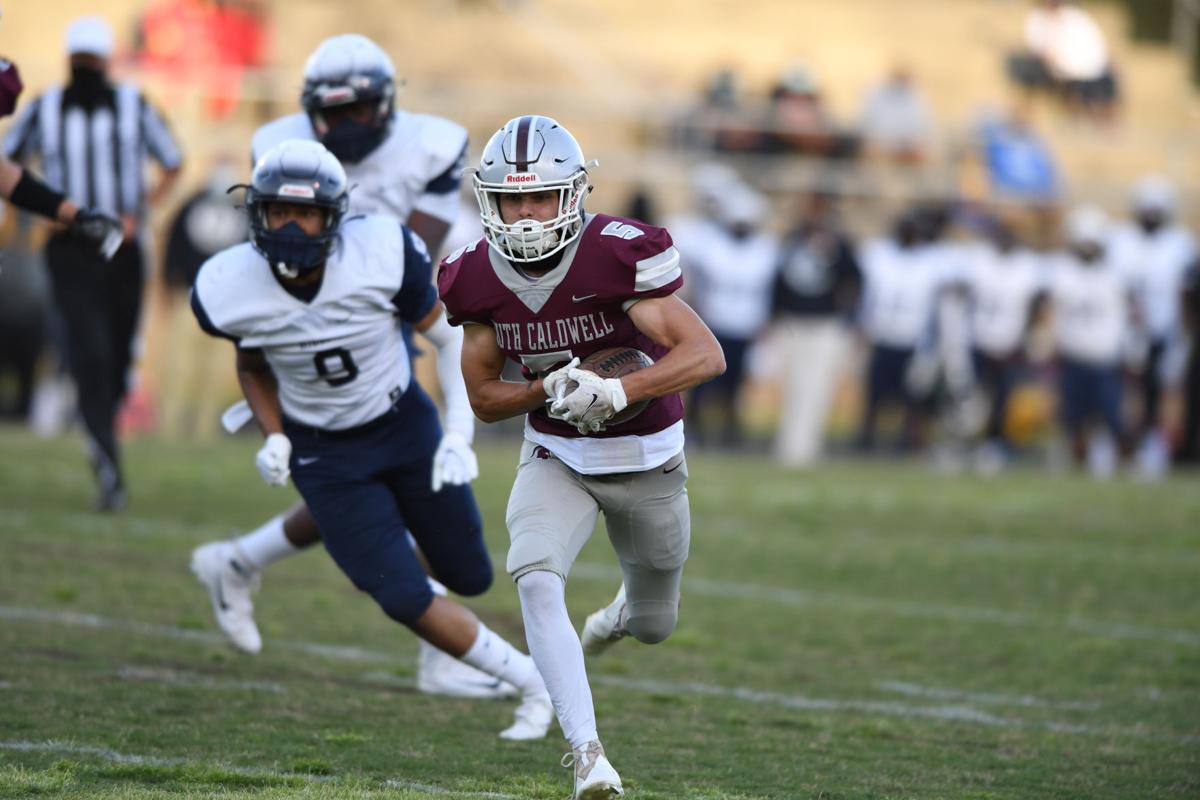 South Caldwell’s Triston Adkins (5) heads toward the end zone for a touchdown in Friday’s 4A playoff game against Durham Hillside. The Hornets defeated the Spartans in their first-round matchup. 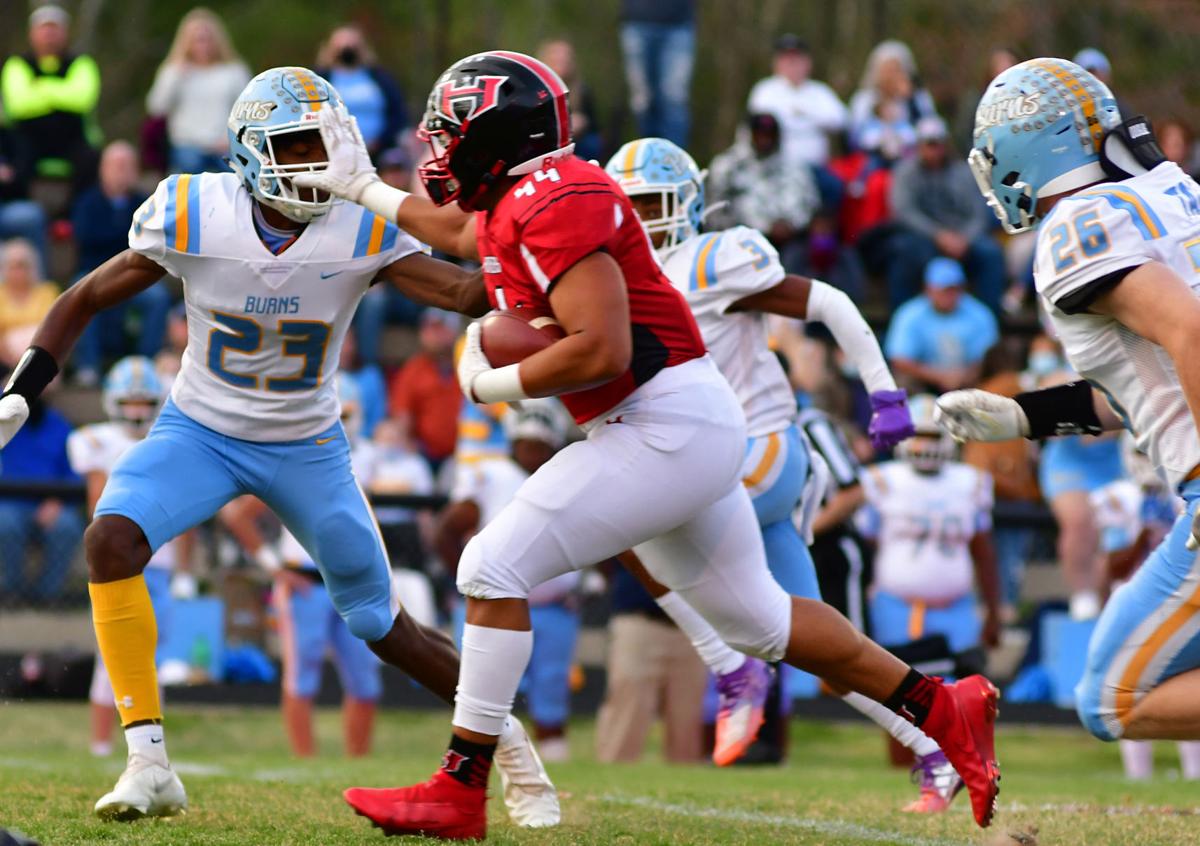 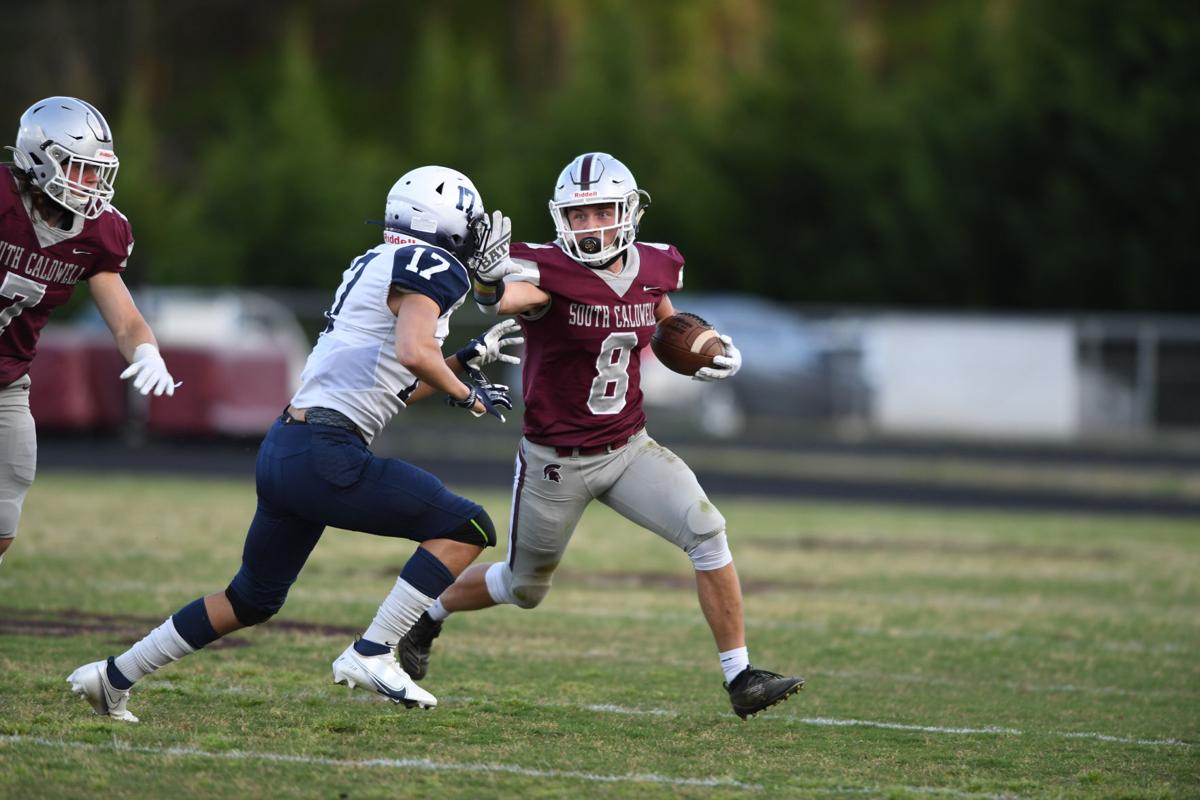 Hibriten’s Daren Perry (8) looks for a hole to open during Friday night’s 2AA playoff game against Burns in Lenoir. Perry was held to 47 yards rushing on 24 carries.

South Caldwell’s Triston Adkins (5) heads toward the end zone for a touchdown in Friday’s 4A playoff game against Durham Hillside. The Hornets defeated the Spartans in their first-round matchup.

Last season, which seems like ages ago, Burns came into Hibriten as a lower seed and left with a resounding second-round victory.

This season, the Bulldogs came into Hibriten as the No. 6 seed in the 2AA West and, as was the case in the fall of 2019, went back to Lawndale late Friday night with a victory over the third-seeded Panthers as Burns prevailed 13-12 in a defensive slugfest that came down to just a handful of big plays.

“It was an absolute defensive game,” said Hibriten coach Sam Mackey. “If you’re a defensive person, then it was one to watch. It just hurts to be a part of it. You know in this game there’s a winner and a loser. Burns is a great football team, but we’re not too bad either.”

Mackey’s team was better than not too bad. It was extremely good. Hibriten scored 384 points while allowing only 39 points this season. The Panthers ended the regular season with three straight shutouts and allowed just two opponents to reach double figures. The Panthers were far and away the best team in a Northwestern Foothills Athletic Conference that didn’t offer much of a challenge for a loaded Hibriten squad.

From the outset, the Bulldogs tested the Panthers’ attack, but Hibriten was able to string together long, time-consuming drives throughout the first half.

After holding Burns to a three-and-out on the opening possession of the game, Hibriten embarked on a 10-play drive that was extended when Noah Isbell caught a screen pass on third and nine and, as the kids would say, yeeted a Burns defender with a stiff arm as he rumbled down the middle of the field for a 31-yard gain. The drive stalled inside the Burns 20, though, and ended when a 36-yard field goal attempt was partially blocked — a dark omen that foreshadowed what ended up being the difference in the game.

“We got a team like that on the ropes a little bit, we’ve got to score,” Mackey said. “In the first half, we had multiple opportunities. We’ve got to put the ball in the end zone.”

Burns’ defensive penetration disrupted Hibriten’s offense, immediately harassing quarterback Daren Perry when he dropped back to pass and taking away running lanes that have been wide open all season. The Bulldogs’ defensive bookends of Alphonso Goodson and Dorien Starnes wreaked havoc on running plays that went outside the tackles, and Mackey said their ability showed up in film study.

“We knew 18 and 44, their two defensive ends, were lightning quick, strong and fast,” Mackey said. “We knew coming in it was going to be struggle to block those guys. They’re very talented and special.”

One Panther who may well be a special player in the future is freshman Dillon Earp. An abbreviated junior-varsity season allowed Earp to see significant time on Friday nights as well, and already he has proven to be a difference-maker on the Hibriten defense. He would shine again in a big moment later in the game.

After the first half ended in a scoreless stalemate, Hibriten made a halftime adjustment on offense and finally found some room to run midway through the third quarter. Taylib Howell capped an 11-play drive with a 26-yard touchdown run that broke the seal. The Panthers lined up for the extra point, the snap was good, the hold was good and Griffin Bryson’s boot sailed upward — but it was met early in its flight by the hand of a Burns defender who got a good push up the middle and blocked the kick, leaving Hibriten with a 6-0 lead.

The Bulldogs immediately got a spark of their own when sophomore Ryan Thompson broke loose on the kickoff and raced up the far sideline with a 60-yard return that set Burns up at the Hibriten 35. Three plays later, Bulldogs senior quarterback Cam’Ron Sweezy scored from six yards out. Garrett Geter’s extra point gave Burns a 7-6 lead and put Hibriten in unfamiliar territory as the Panthers trailed for the first time all season.

The Bulldogs held Hibriten to a three-and-out on the ensuing possession, forcing the Panthers to punt. Burns took over on its own 30 and leading 7-6. Jeremiah Norris broke free for 41 yards on second and eight from the Burns 32 to push the Bulldogs to Hibriten’s 28-yard line. Sweezy got eight yards on first down to get to the Panthers’ 20, and Hibriten shut Norris down for no gain on second and two. Facing a third and two Sweezy dropped back to pass with three Panthers in pursuit. As Sweezy was avoiding the first Panther, the second slowed Sweezy up. That’s when Earp ripped the ball from Sweezy and raced 70 yards for a touchdown that gave Hibriten a 12-7 lead with 21 seconds remaining in the third quarter.

“He has had three games in a row (where) he’s had a strip-and-score like that,” Mackey said. “He’s got a bright future.”

The Panthers went for a two-point conversion that would put them up 14-7, but Perry’s pass was intercepted and another opportunity to gain valuable points fell away.

The two teams traded punts early in the fourth quarter, but Burns had third and 10 from its own 33 when Sweezy found LJ Allen on a fade route that resulted in a 40-yard gain and gave the Bulldogs the ball at the Hibriten 25. Norris ran for 17, setting up first and goal from the Hibriten 8. Two plays later, Sweezy found the end zone again.

Hibriten took possession at its own 33 with 3:58 left, but its comeback hopes ended two plays later when Perry was pressured on an option pitch to Howell, and the ball squirted away. Burns recovered and, after Sweezy ran for 19 yards to the Panthers’ 9, ran out the clock, sparking another playoff victory and celebration on Hibriten’s field.

The Panthers’ season ends with a record of 7-1, while Burns hosts Salisbury in the second round after the Yellow Jackets routed unbeaten No. 2 Maiden 52-14.

South Caldwell’s Will Connor had two touchdowns, while Triston Adkins and Isaiah Kirby added one each for the Spartans, but Durham Hillside ended South Caldwell’s season in the first-round of the 4A playoffs.

The Hornets jumped out front early, scoring 20 points in the first quarter and leading 35-20 at halftime.

The Spartans’ season ends with a record of 3-3 and the 4A championship in the Northwest 3A/4A conference. Hillside will face top-seeded Greensboro Grimsley in the second round after the Whirlies defeated East Forsyth in the first round.