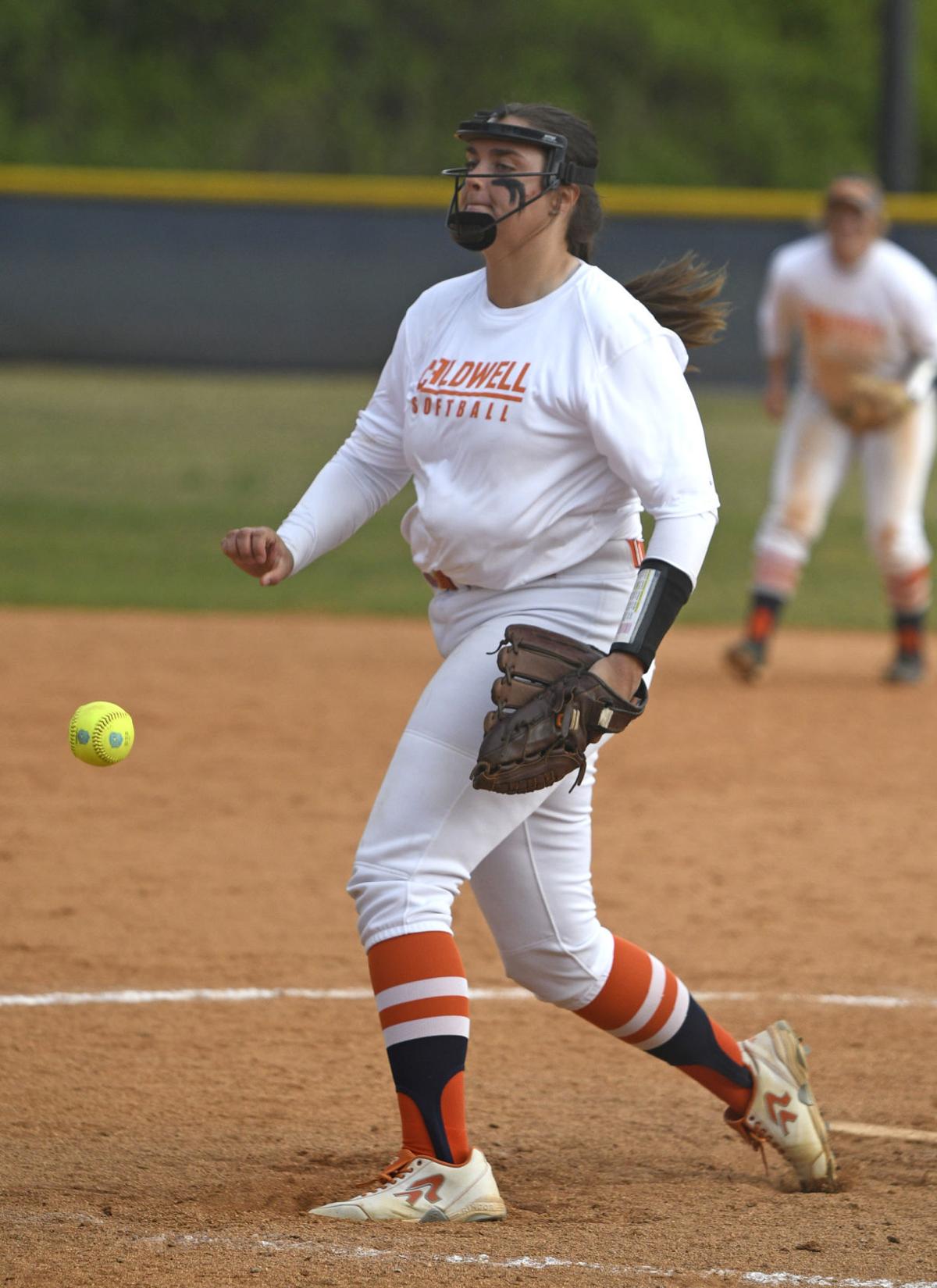 Caldwell’s Jada Wilson went 1-1 in two starts against Catawba Valley this weekend, but she hit a grand slam and was the winning pitcher in Game 2 of Saturday’s doubleheader.

Caldwell Community College and Technical Institute’s baseball team finished with a 14-0 record in Region 10 Division II play and is the top seed in the Region 10 tournament set to start Friday in Mooresville.

Caldwell’s Jada Wilson went 1-1 in two starts against Catawba Valley this weekend, but she hit a grand slam and was the winning pitcher in Game 2 of Saturday’s doubleheader.

Caldwell Community College and Technical Institute’s baseball team finished with a 14-0 record in Region 10 Division II play and is the top seed in the Region 10 tournament set to start Friday in Mooresville.

Caldwell Community College and Technical Institute’s softball team split its final doubleheader of the season on Saturday against Catawba Valley. The Red Hawks took a 9-2 win in Game 1, and Caldwell returned the favor with a 14-7 Game 2 victory.

Ashlyn Castle led the Cobras with three hits, including a double, in Game 1. Alyssa McCrary had a hit and a run batted in, while Abby Reeves, Brittany Reynolds and Mackenzie Johnson all had one hit apiece. Reeves also had two stolen bases, and Jenna Davis also had an RBI for Caldwell.

Wilson was the Game 2 starter as well, and she picked up the win, allowing seven runs on nine hits in seven innings of work. She also had a grand slam and four RBI. Cierra Martin added a solo shot in the top of the seventh.

Taylor Moody hit a two-run double in the top of the fourth, and Castle had two RBI on sacrifice flies. Ceslie James hit a two-run single, and Brianna Lewis had an RBI single. Reeves scored on a wild pitch, and Davis scored on an error.

The Cobras won three of their four games against the Red Hawks this season and finish the regular season 24-14 overall and 14-6 in Region 10, Division II West. Caldwell will host a first-round series in the Region 10 Division II tournament. The opponent and date of the best-of-three series will be announced soon.

BaseballCaldwell swept a three-game weekend series with Thomas Nelson. The Cobras took a 9-6 win in Game 1 of Saturday’s doubleheader. Seth Willis was the winning pitcher, throwing seven innings of scoreless ball. He allowed four hits and walked one while striking out five.

Cole Hales had two hits, including a home run, and three RBI for the Cobras, while Jermie Greene hit a double and a triple with an RBI. Jake Ortiz and Mason Lyda had two hits each, while Noah Love, Hayden Setzer, Michael Logan, John Setzer and Tyler Bradley all had one hit each. John Melton had two RBI with Logan and Setzer adding one each.

Spencer Ledford had 13 strikeouts and got the win in Game 2 as the Cobras prevailed 11-2 in seven innings. Ledford allowed two runs on five hits and walked two. Logan, Setzer and Patrick Usher all homered in the win. Hales and Setzer each had a double for Caldwell, and Bradley had a triple.

Logan, Setzer and Usher had two RBI each with Love, Hales and Lyda adding one apiece.

The Cobras closed out the series with an 11-0 win in five innings on Sunday. Setzer allowed only one hit and three walks in five innings. He finished with five strikeouts.

Setzer, Greene and Usher all homered for Caldwell, and Lyda, Love and Usher all had doubles. Greene had two RBI, while Hales, Logan, Setzer, Usher, Ortiz and Bradley all had one RBI each.

In high school baseball action on Friday, South Caldwell improved to 2-0 with an 18-7 win over Freedom. The Spartans play at McDowell tonight and return home for a Thursday game against St. Stephens.

William Lenoir defeated visiting Hudson 6-1 last week. Bella Hawkins had a hat trick to lead the Wildcats, and Avery Harris notched two goals and two assists. Marie Claire Waechter had a goal and an assist; Lilly Jaroszewski had two assists, and Raegan Watts had one assist. Sydney Watkins had one save in goal and almost blocked a penalty kick, but Hudson’s Addison Brookshire scored with a well-struck shot that skipped off Watkin’s fingers.

MadBum on a roll

Bumgarner, 31, gave up one run in five innings of work, exiting after throwing 81 pitches. The left-hander and South Caldwell graduate fell behind after giving up a double on his 11th pitch and an RBI single later in the inning. He allowed only two more hits, both singles, in his final four innings of work. He walked on and struck out six — including striking out the side in the fifth.

“He made pitches and kept everything manageable,” Arizona manager Torey Lovullo told the Associated Press. “He was under the weather a little bit. There was no potential for him to miss the start. I felt like he emptied his tank in the fifth inning. He’s fine. He’s going to be fine. We were a hundred% certain it was a non-COVID situation.”

Bumgarner also sparked a four-run burst in the third inning with a base hit. He has allowed only two runs in his last 17 innings.

His next start is scheduled for Thursday at Miami.