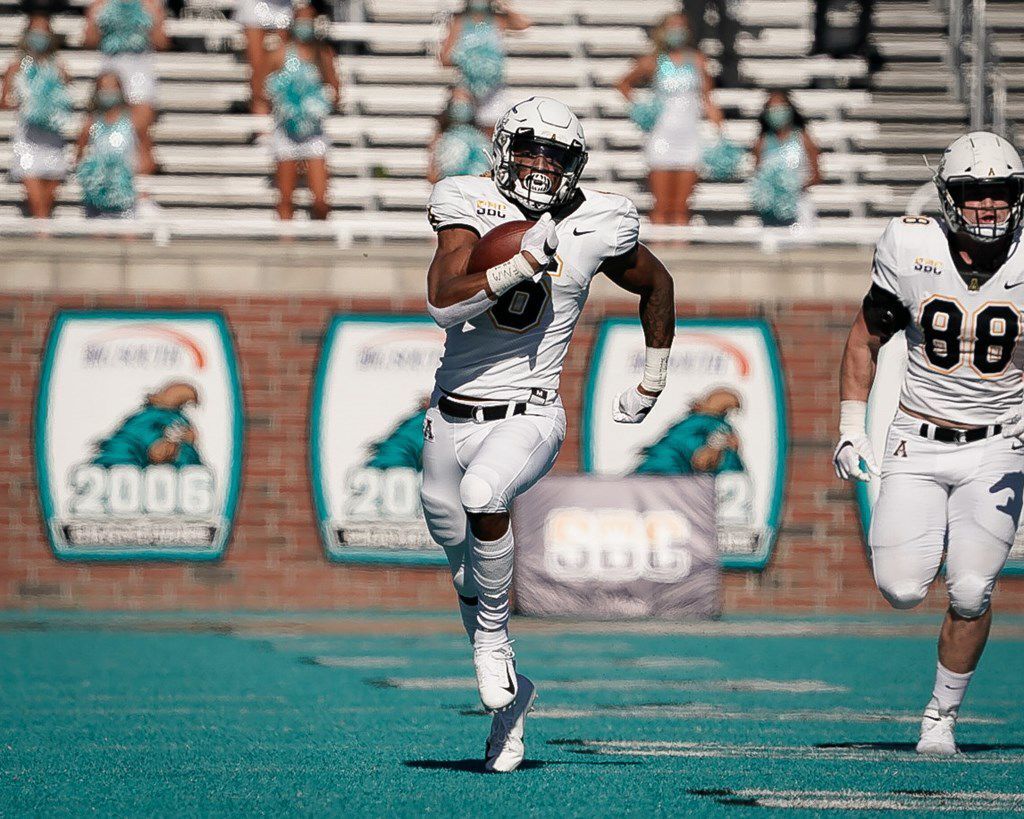 Sophomore running back Camerun Peoples (6) ran for a career-high 178 yards and a touchdown Saturday in Appalachian State’s 34-23 loss at No. 15 Coastal Carolina. 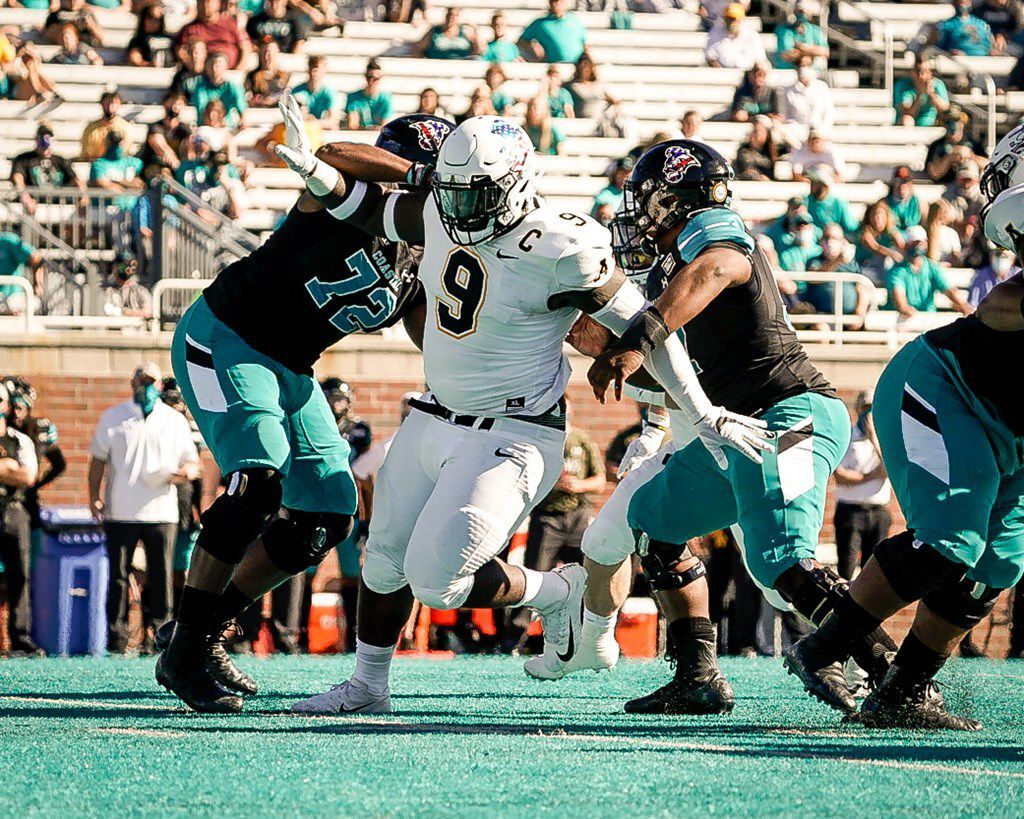 Sophomore running back Camerun Peoples (6) ran for a career-high 178 yards and a touchdown Saturday in Appalachian State’s 34-23 loss at No. 15 Coastal Carolina.

Coastal Carolina has come a long way in a short amount of time.

After being picked to finish last in the Sun Belt Conference’s East Division in the preseason coaches poll, the Chanticleers grabbed control of the division with a 34-23 win over Appalachian State on Saturday in Conway, S.C.

In a game with five lead changes, App State (6-2, 4-1) moved ahead for the final time on Chandler Staton’s 45-yard field goal with 11:47 left. The Mountaineers remained ahead 23-21 until Reese White scored on a 3-yard run for the 15th-ranked Chanticleers with 2:24 left, and D’Jordan Strong’s 38-yard interception return for a touchdown on a fourth-and-20 pass from deep in App State’s own territory in the final 90 seconds sealed the outcome.

Camerun Peoples rushed for a career-high 178 yards with one touchdown on a career-high 27 carries, including 20 first-half carries that produced 171 of his yards, as App State outgained Coastal Carolina both on the ground and through the air. Peoples became the first back to rush for at least 100 yards against the Chanticleers this season.

Staton matched his career high of three field goals with two kicks of more than 44 yards; Demetrius Taylor accounted for 1.5 of App State’s four sacks while posting three tackles for loss, but Coastal Carolina remained unbeaten on the strength of several big plays.

With the Chanticleers on the verge of retaking the lead in the fourth quarter, quarterback Grayson McCall reached for the end zone on a keeper from the 6 and had the ball knocked loose by Kaiden Smith. App State teammate Nick Hampton fell on the ball in the end zone for a crucial touchback with the Mountaineers clinging to a two-point edge.

Shortly after a 33-yard pass to the CCU 36 was wiped out by offsetting penalties, with holding following a flag for defensive offsides, Coastal Carolina regained possession with an interception near midfield and put together a 10-play, 49-yard touchdown drive that took 4:35 off the clock.

McCall accounted for three touchdowns while passing for 200 yards and rushing for 69 more. App State held the Chanticleers to 169 rushing yards on 34 carries, including 15 first-half rushing yards on 14 attempts.

In a rare move, App State chose to take possession after winning the toss, and Peoples’ 50-yard run on the second play from scrimmage set up his 1-yard touchdown run. Coastal Carolina responded with a 75-yard touchdown pass on its first play, missed the extra point and added a 51-yard field goal early in the second quarter before Staton helped the Mountaineers regain the lead at 10-9 with a 44-yard kick.

A third-down sack in App State territory from D’Marco Jackson and Caleb Spurlin forced a punting situation, and the Mountaineers took over at their 16 with a minute left in the half and needed only 51 seconds to execute a nine-play, 84-yard touchdown drive.

At the Coastal Carolina 25 with 13 seconds left and no timeouts available, Thomas hit Christian Wells in stride down the right sideline for a score that sent App State into the locker room with a 17-9 advantage.

McCall rushed for a 67-yard touchdown on a third-and-12 keeper less than a minute into the second half, but a two-point pass fell incomplete, allowing App State to hold onto its lead. Staton’s 36-yard field goal following Thomas’ 62-yard pass to Malik Williams increased the margin to 20-15, and Coastal Carolina moved ahead 21-20 on McCall’s 19-yard touchdown pass to CJ Marable with 6:21 left in the third quarter.

True freshman Nate Noel, the No. 2 option for a short-handed backfield, had four carries for 24 yards and a 9-yard reception on App State’s final scoring drive, but the Mountaineers had to settle for a field goal following a third-and-3 stop from the 25.

The Mountaineers return to action next Saturday with an 8 p.m. home game against Troy, while Coastal Carolina looks to clinch the Sun Belt East Division at Texas State next Saturday. If Coastal wins its final three regular-season games, it could lead to a New Year’s Six bowl appearance. More immediately, though, the Chants know that they need to win only one of their two final conference games to lock up a berth in the Sun Belt championship game.