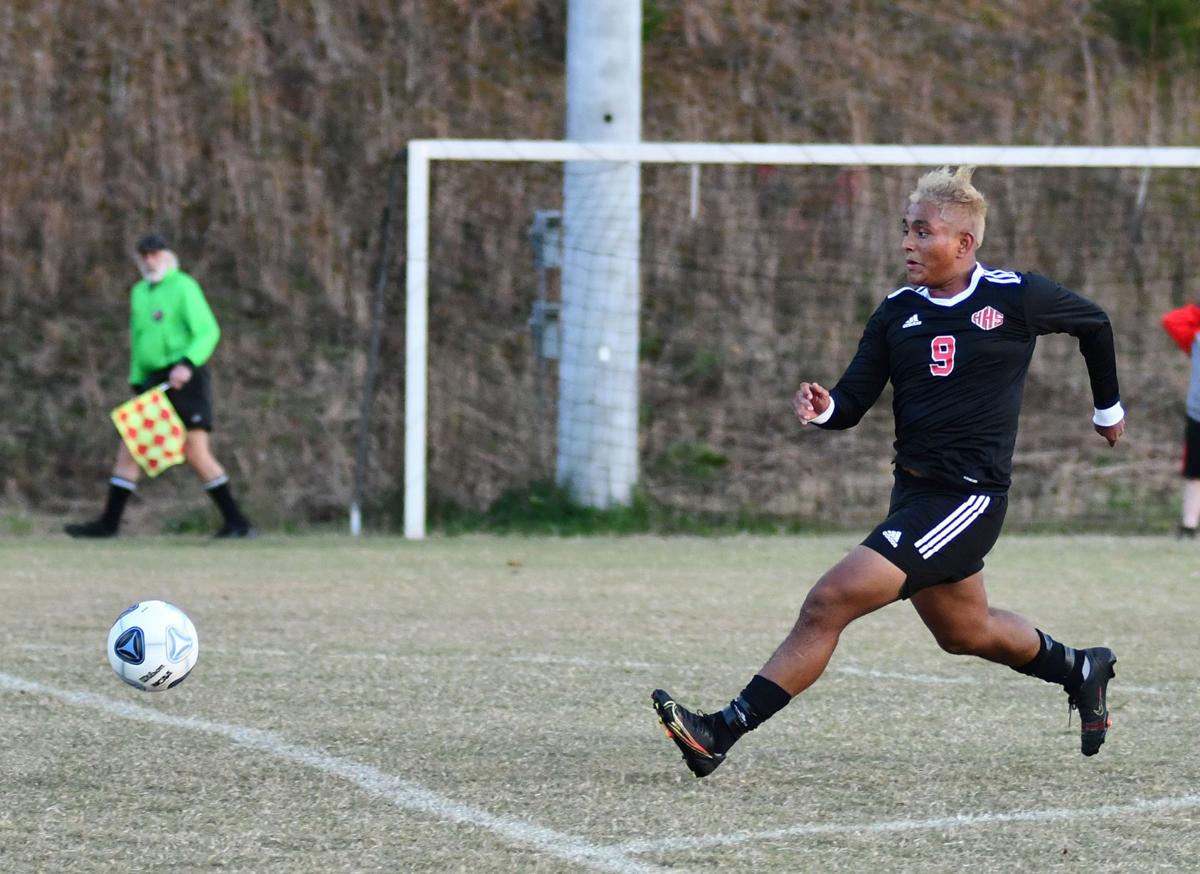 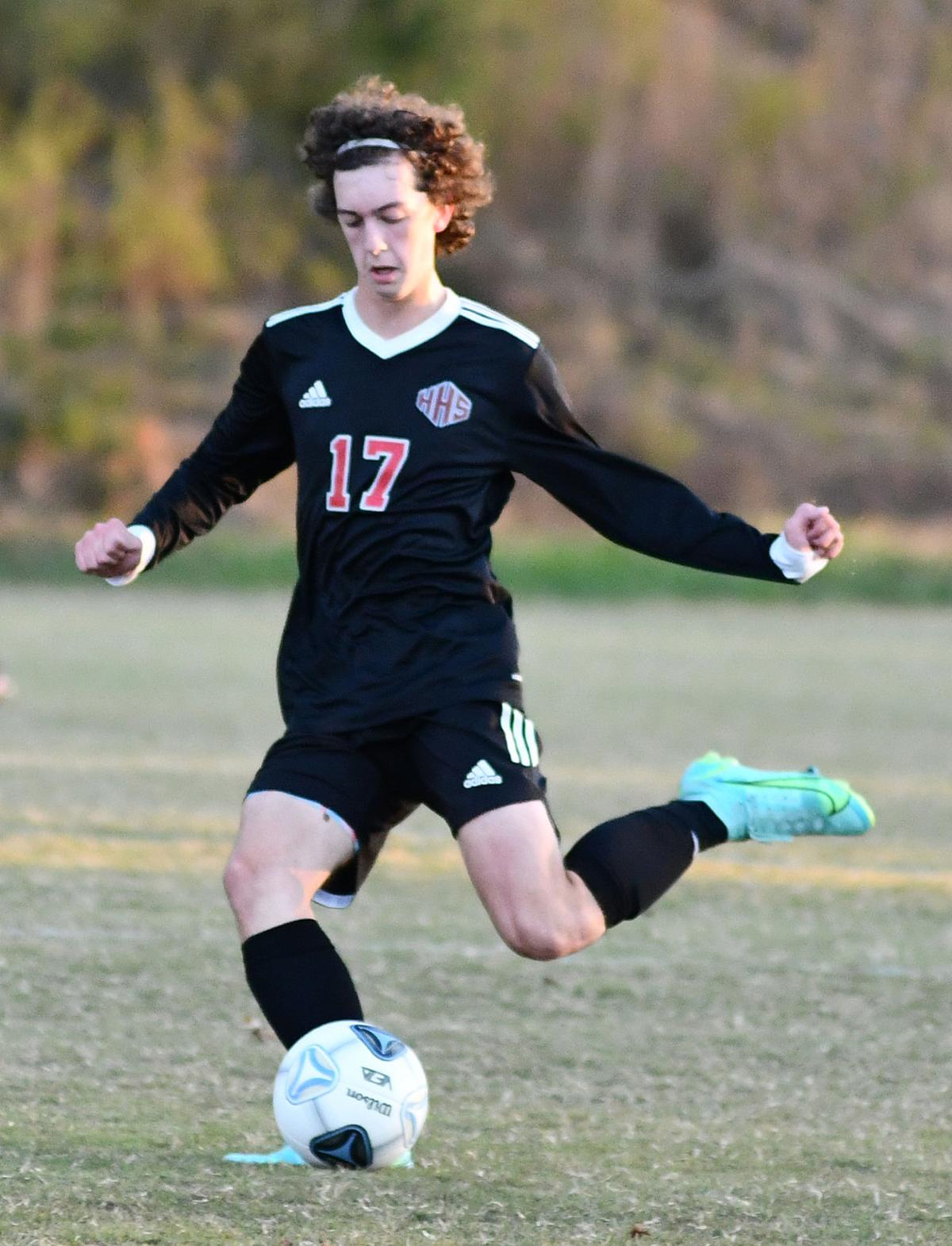 Hibriten’s Tyler Roberts (17) scored two goals for the Panthers on Monday, including the game-ender with 46 seconds remaining. Roberts has six goals in his last two games. A last-second shot against South Caldwell that found the back of the net as the final horn sounded was counted, giving him four in that game.

Hibriten’s Tyler Roberts (17) scored two goals for the Panthers on Monday, including the game-ender with 46 seconds remaining. Roberts has six goals in his last two games. A last-second shot against South Caldwell that found the back of the net as the final horn sounded was counted, giving him four in that game.

When Rocky Balboa was hand-picked to fight world heavyweight champion Apollo Creed in the movie “Rocky,” the over-matched club fighter said he just wanted to go the distance with the champ.

No. 32 West Mecklenburg came to play top-seeded Hibriten in the first round of the 3A playoffs with 12 players. The Hawks had all of two wins this season, both over 3A cohort West Charlotte in the Queen City 3A/4A Conference, and nearly everyone in attendance expected them to be back on the bus to Charlotte sooner rather than later.

The game ended as expected, with a 9-0 Hibriten win, but the Hawks came within 46 seconds of going the distance with one of the best teams in the 3A class despite being shorthanded, overpowered and outmatched.

Johnny Pineda scored four goals for the Panthers (18-1), and Tyler Roberts netted two more, including the game-ender with less than a minute remaining to lead Hibriten into the second round. No. 16 East Lincoln awaits after the Mustangs defeated No. 17 Smoky Mountain 5-1 on Monday, and Hibriten coach Jim Blanton said his team will need to dial up the intensity as the playoffs progress.

“Our midfield play has to get better, and our finishing — when we get chances (to score), it has to be on point,” Blanton said, while praising Pineda for his night’s work. “When you get chances going the rest of the way, you have to make those count. You can’t waste opportunities.”

If there was a flaw in the game for the Panthers on Monday, it was missed opportunities at the frame. Hibriten could’ve ended the game before halftime, but several shots missed just wide of the net and West Meck keeper Saul Estrada played a spectacular game in goal as he made several key saves throughout the night that kept Hibriten from landing the knockout blow until a few seconds remained.

A major key for the Panthers was coming out of the game injury-free, and they were able to limit the minutes of Kevin Rivera-Rios, who suffered a significant contusion just above his knee in the regular-season finale against South Caldwell. Blanton said Rivera-Rios estimates he’s somewhere between 65 and 75%, and he expects to improve before East Lincoln comes to town on Thursday for a highly anticipated second-round matchup.

To date, the only team to solve the puzzles Hibriten presents is 4A Watauga. The Pioneers sagged back on defense, allowing Hibriten to hold the ball at will and then quickly counterattacking.

Boise State gets shut out in second half, gives up lead in 27-16 loss at No. 21 San Diego State

“The way Watauga played us that game allowed us to possess the ball all we wanted,” Blanton said. “Typically, if you’re going to allow us to possess it, you better have the defense Watauga had. I’ll take our offense against most people’s defense.”

Going back to his earlier theme, Blanton said the work to improve will continue all the way up until Thursday.

“We have to find ways to finish and score, but we have to make sure defensively we’re sound from the front to the back,” he said. “Our team defense has to be better. Right now, we’re not where we need to be. We’re not playing as a unit defensively, so that will be our focus the next couple of days.”

Also tallying goals for the Panthers were David Franquiz, Eric Meza and Douglas Beltrand with one goal each; Franquiz also had three assists, while Nick Hawkins and Gerardo Rodriguez finished with two each. Rivera-Rios and Miguel Ayala had one assist apiece.

The winner of Thursday’s game will face either No. 8 North Buncombe or No. 24 Enka, which upset No. 9 Raleigh Atkins 4-1 on Monday.

Warhorses 6, Warriors 1: In Black Mountain, Brian Silva scored West Caldwell’s lone goal in the Warriors’ first-round loss to Owen in the 2A playoffs. The Warhorses scored four times in the first half and added two more tallies in the final 40 minutes.

Gaspar Domingo assisted on Silva’s goal, and West Caldwell’s season ends with a mark of 10-12.

In other postseason action around the region, Hickory Ridge defeated Watauga 3-0 in the 4A playoffs. Lincolnton was a 2-0 winner over Wilkes Central, and Monroe topped Bandys 3-0 in the 2A playoffs. Cramer defeated Freedom 2-0 in the 3A bracket.