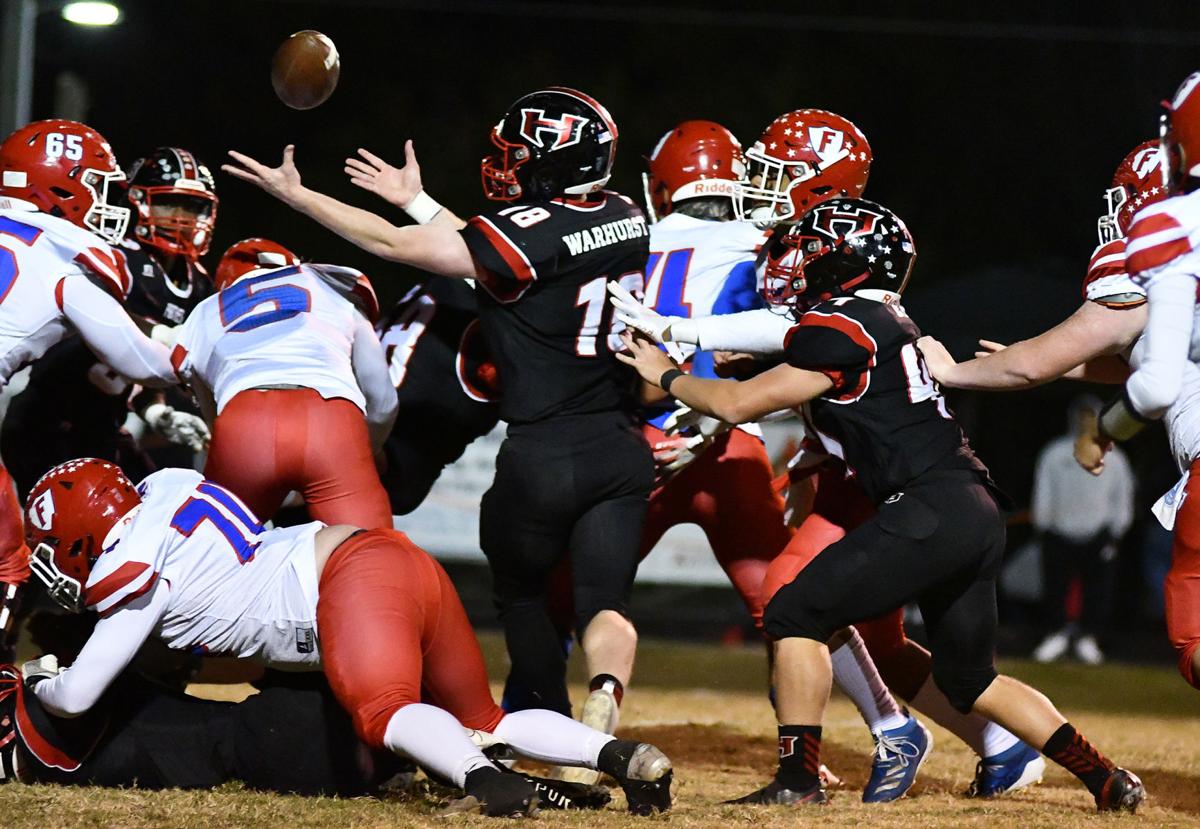 Freedom was preparing to score when the pigskin popped loose and Hibriten’s Matt Warhurst (18) recovered it during Friday’s first-round game in the 3A playoffs. 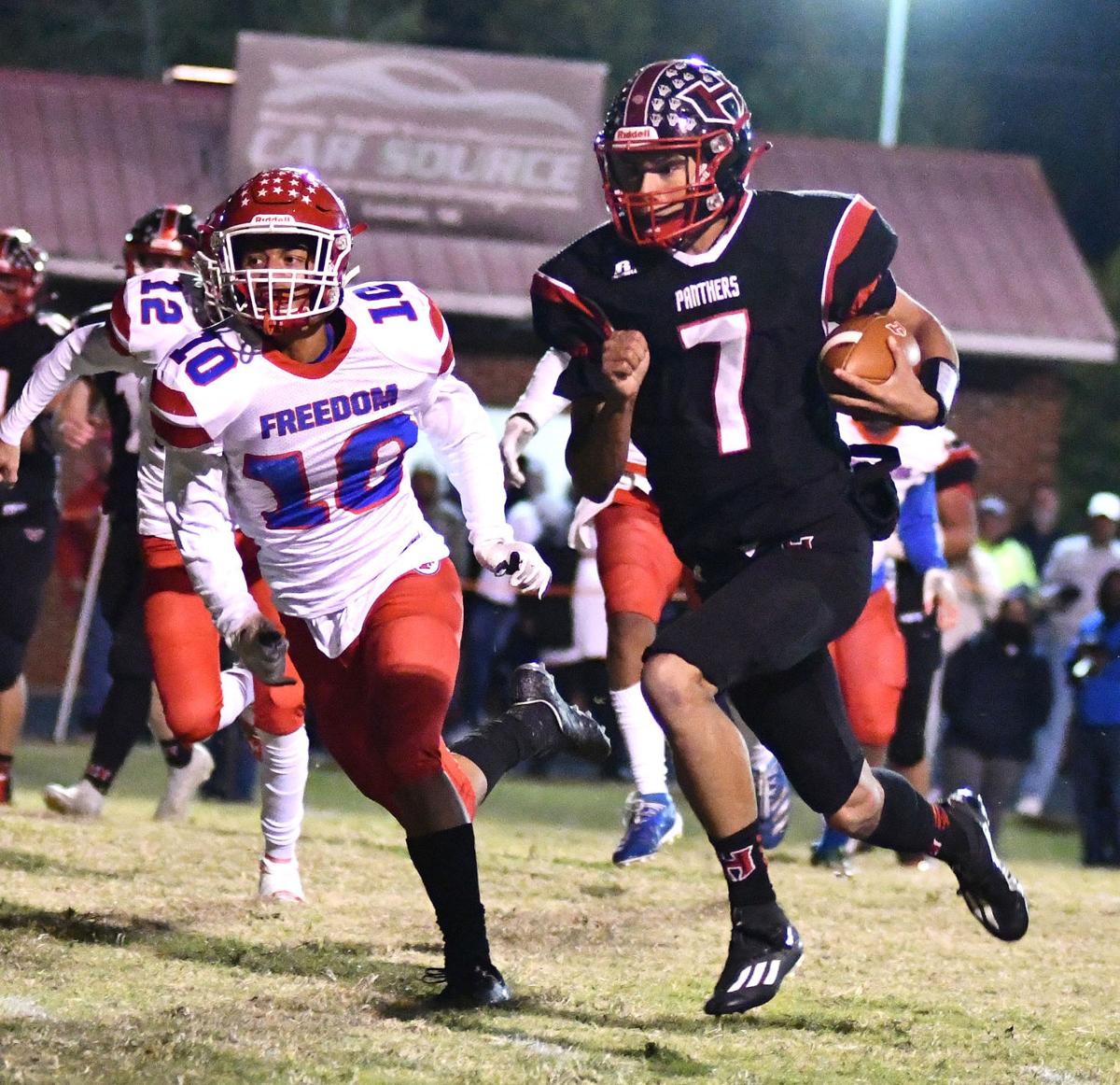 Above left: Hibriten’s Coby Wilson (7) turns the corner on his way to scoring Hibriten’s first touchdown as Freedom’s Demarcus Lowrance (10) follows. Above right: Hibriten’s Sadharri Moore scored what proved to be the game-winning touchdown early in the third quarter of Friday’s first-round playoff win over Freedom. 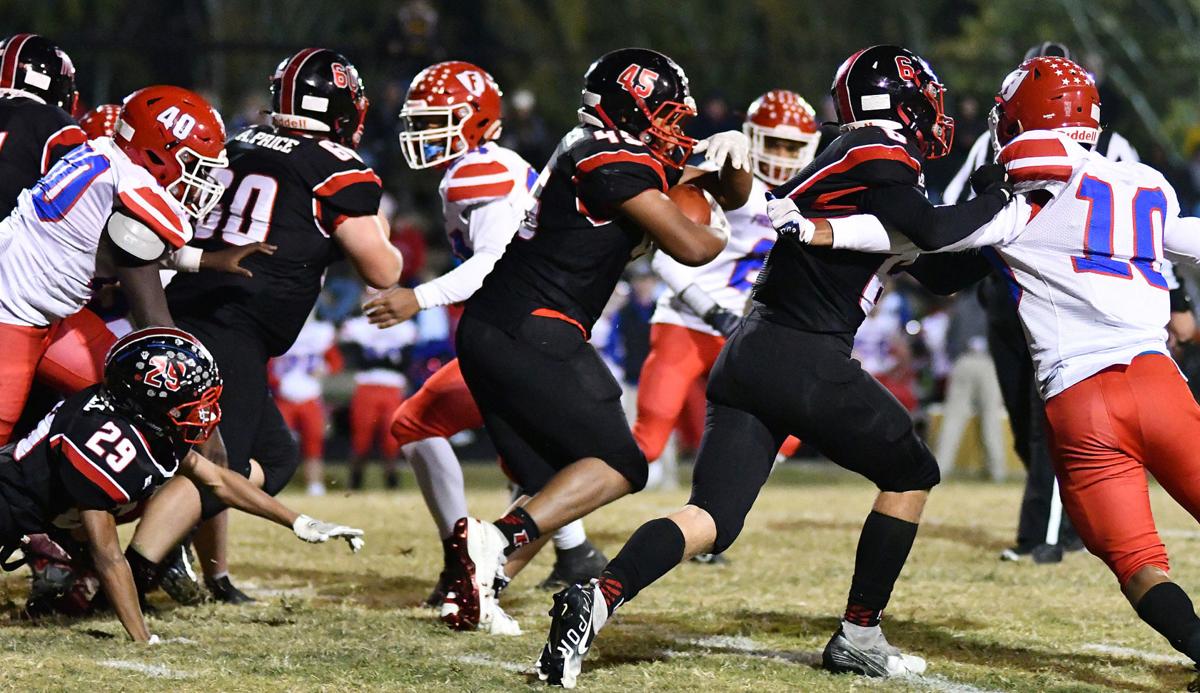 Hibriten’s Gabe Suddreth (45) had 14 carries for 68 yards Friday against Freedom. 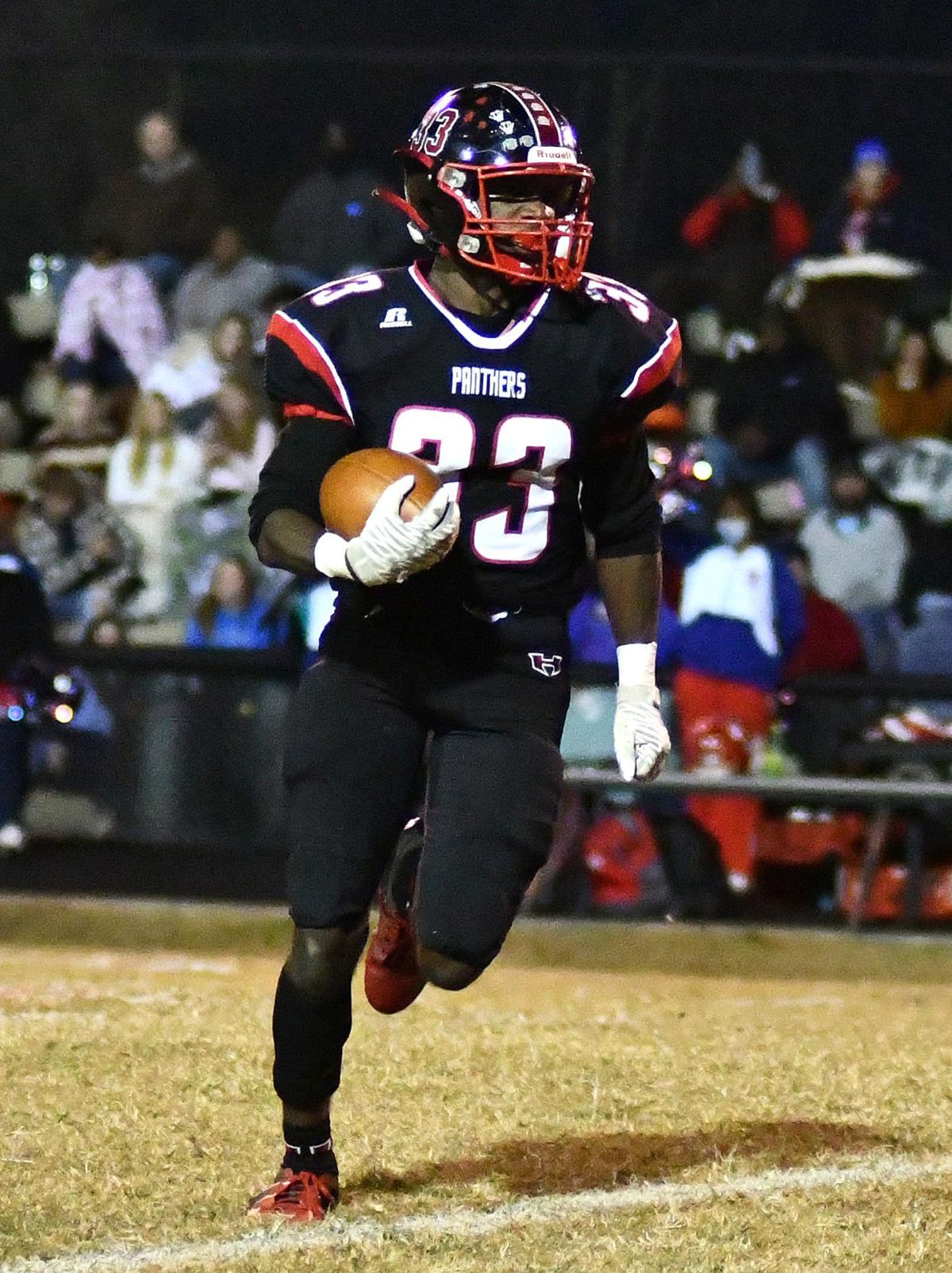 Above right: Hibriten’s Sadharri Moore scored what proved to be the game-winning touchdown early in the third quarter of Friday’s first-round playoff win over Freedom.

Freedom was preparing to score when the pigskin popped loose and Hibriten’s Matt Warhurst (18) recovered it during Friday’s first-round game in the 3A playoffs.

Above left: Hibriten’s Coby Wilson (7) turns the corner on his way to scoring Hibriten’s first touchdown as Freedom’s Demarcus Lowrance (10) follows. Above right: Hibriten’s Sadharri Moore scored what proved to be the game-winning touchdown early in the third quarter of Friday’s first-round playoff win over Freedom.

Hibriten’s Gabe Suddreth (45) had 14 carries for 68 yards Friday against Freedom.

Above right: Hibriten’s Sadharri Moore scored what proved to be the game-winning touchdown early in the third quarter of Friday’s first-round playoff win over Freedom.

Battle tested — that has been Hibriten’s mantra the last month of the football season as the Panthers have embraced a grind-it-out mentality that’s in contrast to the quick-strike high-powered offenses of recent history.

The new identity has given Hibriten a quiet confidence in close games, and that confidence was apparent in Friday’s nervy 14-13 win over Freedom in the first round of the 3A playoffs.

Last season, Hibriten ran roughshod through the old Northwestern Foothills Athletic Conference and had trouble in the opening round of the 2A playoffs against Burns. The Bulldogs claimed a one-point win in a game that put the Panthers in unfamiliar territory — trailing late in a low-scoring game against a defense that was playing well and was able to shut down the potent Hibriten offense.

This year’s Panthers aren’t having any trouble of the sort. Hibriten has won its last three games, including two against 4A opponents, by a total of 14 points. Late in the game while clinging to a one-point lead after a late Freedom score, the Panthers got the ball on their own 5 and picked up two key first downs to sealed the win.

“Even when we got the ball back down there on the 5-yard line, our thing we talked about was let’s just get this clock running and grind this thing out,” Panthers coach Sam Mackey said.

The Panthers (7-3) looked a little shaky early in the first half, going three and out on their first offensive series and giving up a 42-yard run to Freedom’s Curtis Young on the Patriots’ first play. Freedom pushed all the way to the Hibriten 5 before Matt Warhurst recovered a Patriots’ fumble on 3rd and 1 from the Hibriten 5 to give the Panthers the ball at that spot.

From there, Hibriten embarked on a 17-play, 95-yard drive that took nearly eight and a half minutes off the clock and culminated with a 10-yard touchdown run by Coby Wilson, who had a 48-yard touchdown pass to Jabee Powell called back earlier in the drive. Trenton Cornett’s extra point gave the Panthers a 7-0 lead early in the second quarter.

After an exchange of fumbles, the Patriots again drove deep into Hibriten territory, but the Panthers stiffened up and forced Freedom to line up for a 25-yard field goal attempt with less than 30 seconds left in the first half. The kick was blocked, and as several Panthers ran off the field in celebration, a Freedom lineman picked up the live ball and lateraled to the holder, Avery Pollard, who scored a touchdown on the play. The half ended with the score knotted at 7-7 with Freedom due to receive the second-half kickoff.

“I’ll never assume they know a blocked field goal is a live ball,” Mackey said. “That was a big turning point in the game. At that point, they hadn’t scored on us. That was something.”

The game turned back into Hibriten’s favor when the Panthers recovered a fumble on the opening kick of the second half, setting them up at the Freedom 25. Six plays later, Sadharri Moore found the end zone from 6 yards out to put Hibriten up 14-7 after Cornett’s extra point.

The Patriots had a chance to tie the game with 3:55 left to play when Jaylen Barnett scored on a 4th and 1 from the Hibriten 11. Freedom lined up for the extra point but then called time out to talk it over. Coming back onto the field, the Patriots lined up for a two-point conversion and nearly got it, but Barnett slipped trying to make a cut and fell short of the goal line and keeping Hibriten out front at 14-13.

“On their two-point try down here, the kid slipped and I’m afraid if he hadn’t, he probably would’ve been in there,” Mackey said. “It happens sometimes. In 2017, we won the whole thing and we got a little lucky at times. Sometimes you need a little luck on your side.”

Field Pass: Everything you need to know about Saturday's Territorial Cup game between Arizona and ASU

It's UNI defense vs. EWU offense on Saturday

The Panthers set up expecting Freedom to attempt an onside kick, but the Patriots kicked it deep and over Wilson’s head. He fell on the ball at the Hibriten 5 with 3:55 left in the game. The Panthers picked up two first downs, including a 30-yard run by Dillan Earp, that put Hibriten in position to end the game with two kneel-downs.

“It just feels awesome to be on the other side of this one-point thing because we’ve been on the other end of it,” Mackey said, referencing the first-round loss to Burns last season. “It was a tough game; we didn’t execute on everything. Hats off to Freedom. They’re such a good team, well coached and played tough. It’s good to have a little success here in the playoffs.

“I’m proud of the kids and the program. Win and advance — that’s the name of the game this time of the year.”

Gabe Suddreth led Hibriten with 68 yards rushing on 14 carries. Wilson had 10 carries for 55 yards; he also completed two of his four passes for 28 yards. Earp had two carries for 34 yards, and Moore had five totes for 32 yards. Powell had five carries for 17 yards to go with one reception for 25 yards, and Chandler Wyke one carry for 2 yards. Davey Shore had one catch for 3 yards.

The win gives the Panthers another home game this week as No. 10 Concord comes to town. The Spiders (7-3) defeated Tuscola 34-14 in the first round. Concord started the season 0-2 and reeled off five straight wins until a 47-0 loss against Kannapolis in the last game of the regular season snapped the win streak.

Friday’s second-round game is set for a 7:30 p.m. kickoff; admission, which is determined by the North Carolina High School Athletic Association, is $8.

Cougars 73, Spartans 20: In Charlotte, defending 4AA state champion and 4A 10th seed Julius Chambers raced out to a big early lead and cruised to an opening round win over No. 23 South Caldwell.

The Cougars will play at No. 7 Hickory Ridge in the second round on Friday.

The Spartans end their season with a mark of 7-3. Individual statistics were not available for South Caldwell.