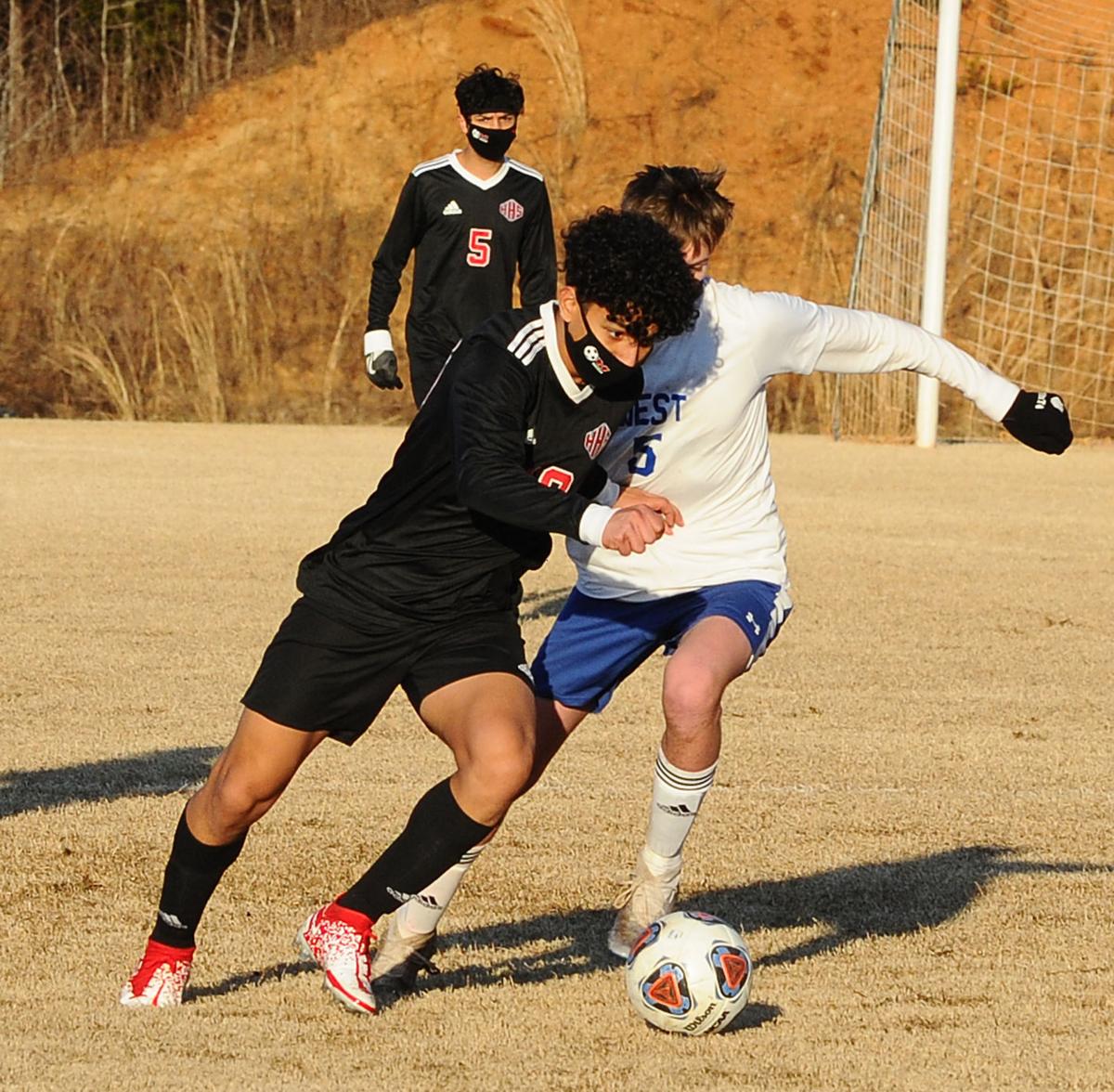 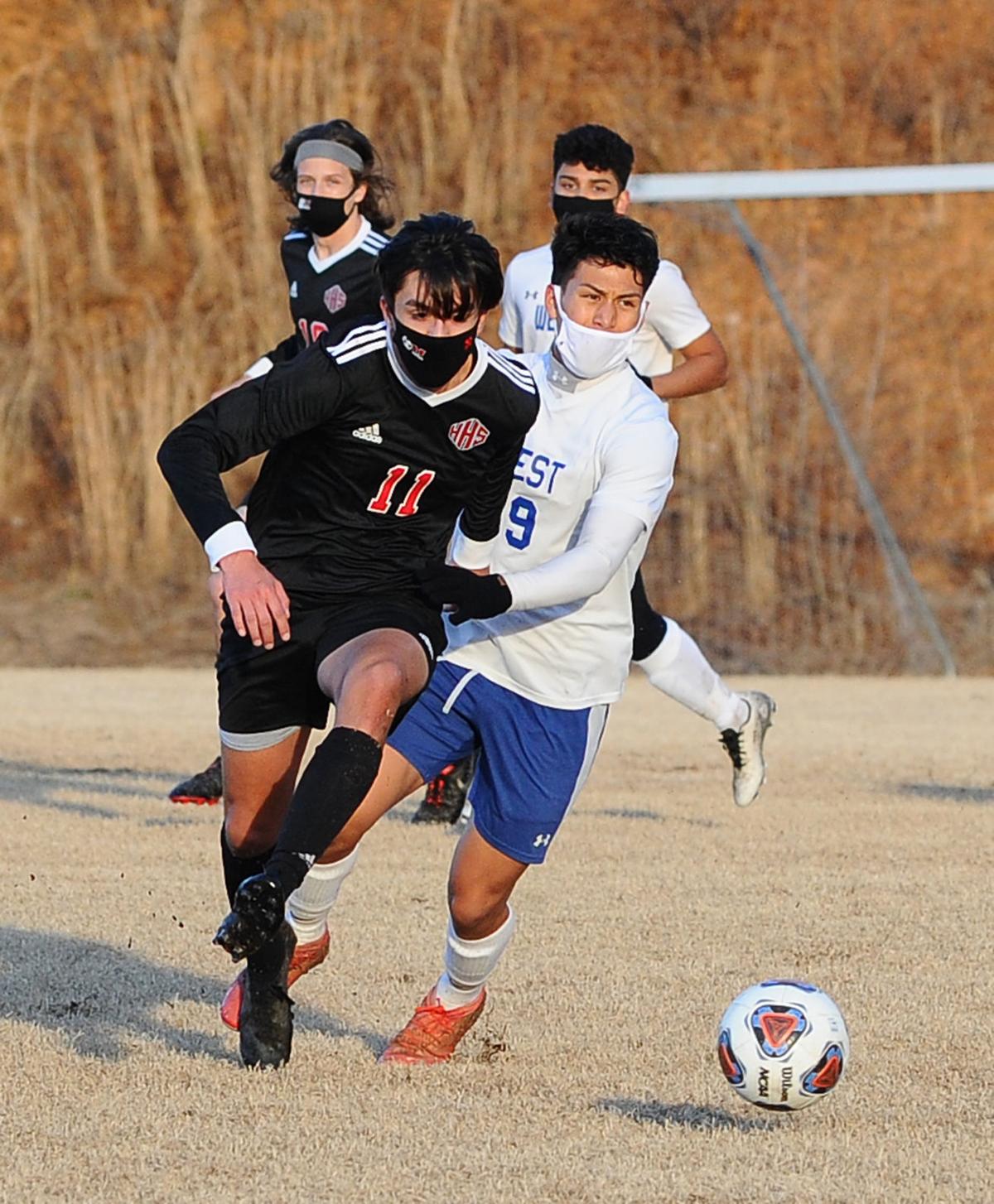 Hibriten’s David Franquiz (11) battles with West Caldwell’s Fracesco Gonzales (9) during Monday’s game. Franquiz, who was all-state last season, had a goal and four assists in Hibriten’s win over its county rival.

Hibriten’s David Franquiz (11) battles with West Caldwell’s Fracesco Gonzales (9) during Monday’s game. Franquiz, who was all-state last season, had a goal and four assists in Hibriten’s win over its county rival.

Hibriten lost only three starters from last year’s 2A West regional finalists, so the Panthers are expecting big things this season.

Leading the charge is senior goalkeeper Mack Waters and defenders Zach Young (senior), Trent Allen (senior), and Irwin Guzman (junior). Senior Grayson Clark will step in to try and help fill the shoes of Josh Crisp who graduated. Griffin Bryson also makes a return to soccer after a two-year hiatus, and coach Jim Blanton said he will also help out on defense.

Senior captains Simon Hawkins and Allen Meza hold down the midfield, and they are joined by junior Nathanial Wright.

The frontline is the Panthers’ strong point. Junior captain and striker David Franquiz, who was all-state last season, returns along with sophomore Gerardo Rodriquez and junior Kevin Rivera-Rios.

“Our team looks to run a lot of their offense through David Franquiz and Kevin Rivera-Rios,” Blanton said. “Simon Hawkins and Allen Meza will do most of the dirty work winning the 50/50 balls and distributing balls to our strikers.”

The strikers have done a solid job of putting those balls in the net. Franquiz and Rodriguez have scored 11 goals each to lead the team, and Hibriten’s offense thus far has been nothing short of explosive.

The Panthers have opened their season with 45 goals in their first five games, each of which ended in 9-0 mercy-rule victories — including Monday’s win over county rival West Caldwell. Blanton said he felt like the team would be very good this season with so many starters returning from last year’s squad, which translated into some high hopes.

“We have set some individual goals as well as team goals,” Blanton said. “Our first team goal is to win the conference championship for the third straight year. We also want to qualify for the state playoffs. We have set an ultimate goal to win a state championship. We know this is a lofty goal, but we feel with hard work and a little luck we may possibly have the chance.”

Rodriguez scored three goals against the Warriors on Monday, while Franquiz had a goal and four assists. Rivera-Rios had a goal and two assists; Hawkins had 2 goals, and Meza and Allen had a goal apiece. Erwin Guzman had an assist, and keeper Mack Waters had one save in the shutout victory.

The Panthers (5-0) visit Fred T. Foard tonight, while the Warriors (1-2) look to rebound from two straight losses with a trip to West Iredell tonight.