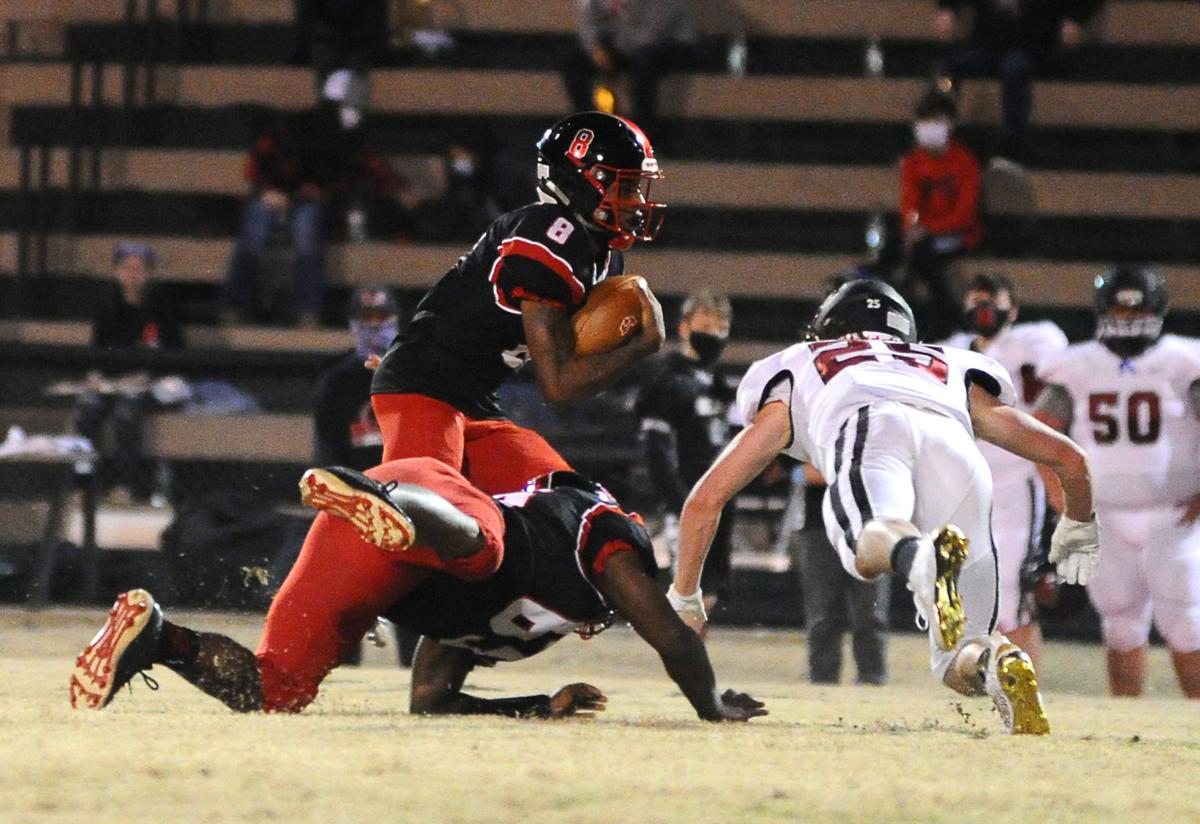 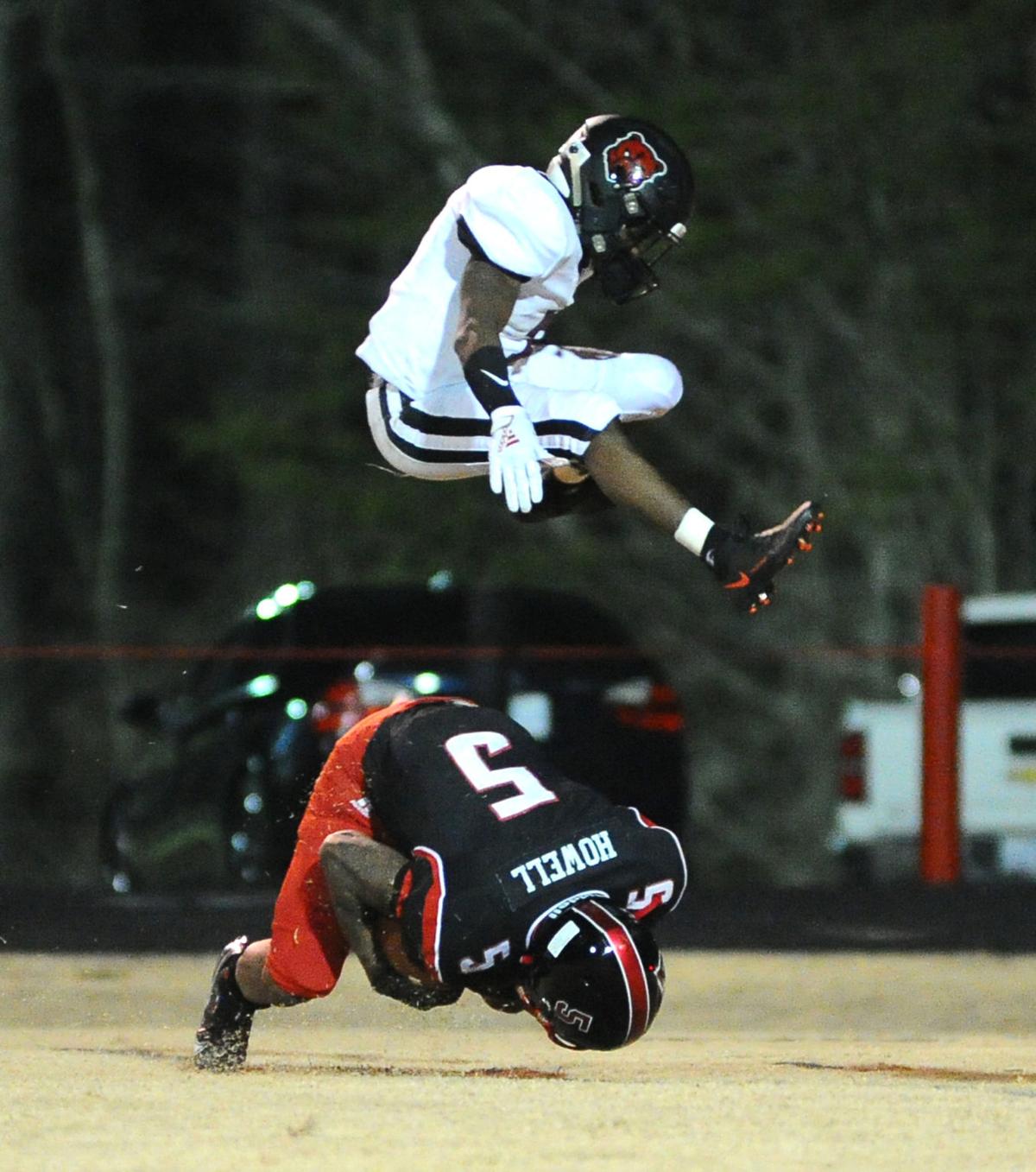 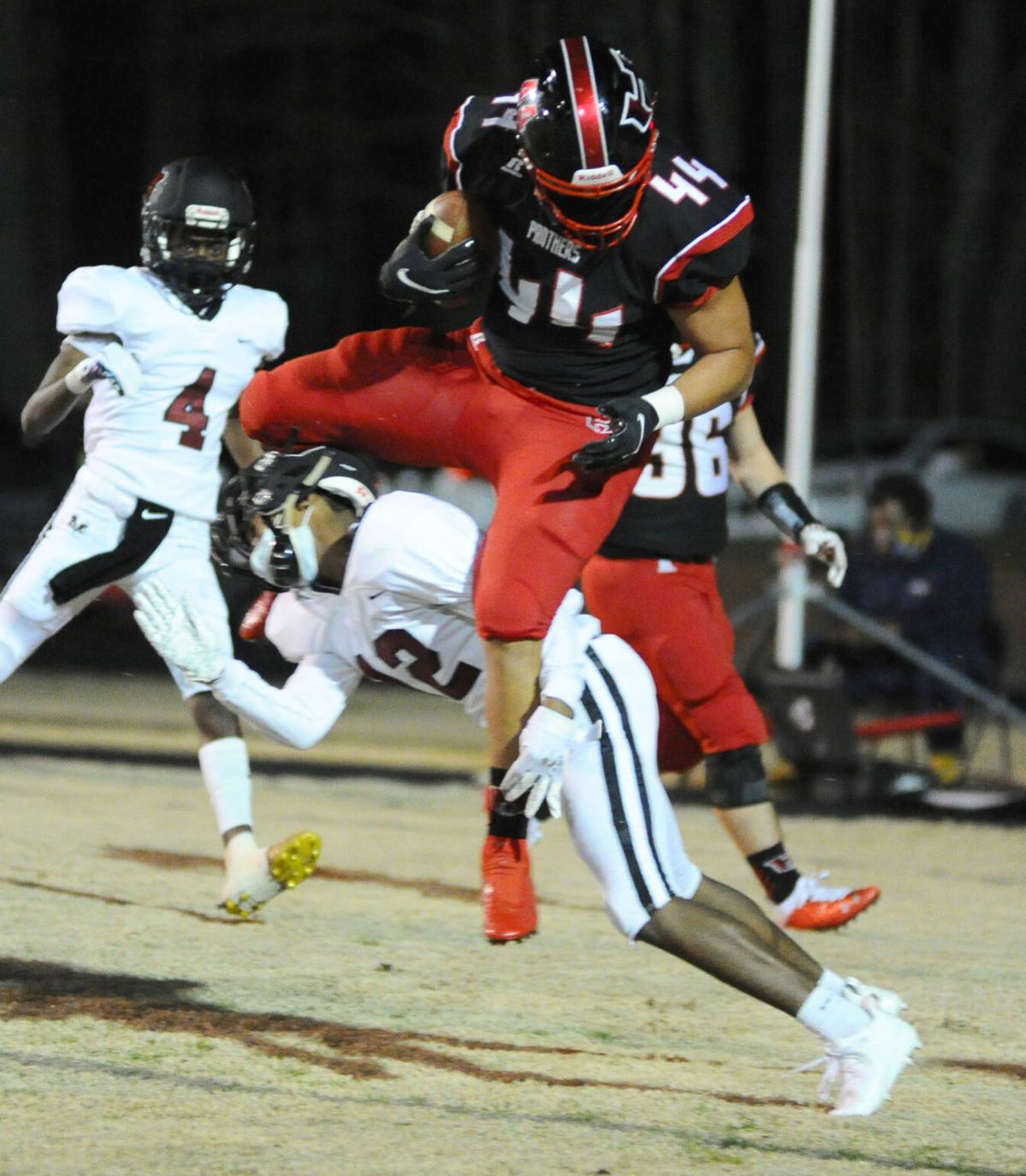 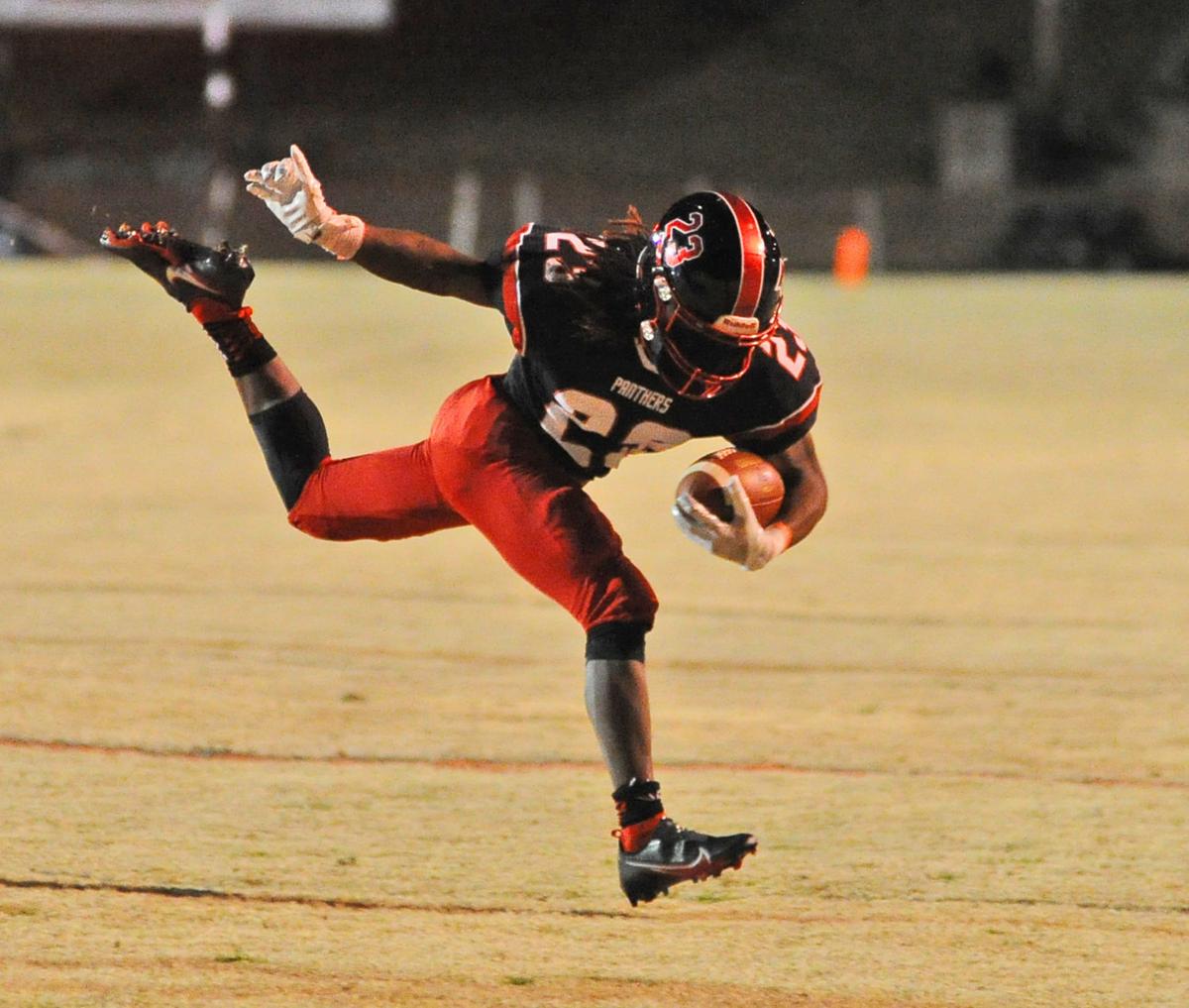 Cedric Shuford (23) gets tripped up by the Bunker Hill defense. Shuford scored two touchdowns for the Panthers in their season-opening win over the Bears.

Cedric Shuford (23) gets tripped up by the Bunker Hill defense. Shuford scored two touchdowns for the Panthers in their season-opening win over the Bears.

In normal times, late February brings thoughts of pitchers and catchers reporting to spring training and the crack of the bat as baseball gets going.

These are not normal times.

Some 15 months after they played their last game in the second round of the 2019 2AA state playoffs, the Hibriten Panthers returned to the field Thursday night and showed very few signs of rust in a dominating 50-13 win over Bunker Hill.

The Panthers took the opening kickoff and promptly marched 64 yards in six plays, the drive capped by a 1-yard touchdown run by Noah Isbell. A low snap on the point-after try forced a pass, and Isbell caught that as well for a two-point conversion that put Hibriten up 8-0.

The Panthers’ defense got on the board less than a minute later when David Shore recovered a fumble at the Bunker Hill 1-yard line and stepped across the goal line for another Hibriten TD. The PAT was no good, and the Panthers led 14-0 with just 2:11 elapsed in the first quarter.

Hibriten didn’t sit on that lead, however. After forcing the Bears to punt, the Panthers took over at the Bunker Hill 43. Facing second down and six yards to go from the Bears’ 39, Hibriten’s Daren Perry hit Taylib Howell on 23-yard pass that Howell hauled in with one hand and fully laid out horizontal to the ground. The circus catch set the Panthers up with a first and 10 from the Bunker Hill 16, and Absher ran for 15 yards to the Bears’ 1 before bullying his way to a 1-yard TD run on the following play. Bryson’s point-after pushed the Panthers’ lead to 21-0 with more than five minutes left in the opening quarter.

Hibriten’s defense got on the board again less than two minutes later, sacking Bunker Hill’s Carson Eller in the end zone for a safety and a 23-0 lead through the first quarter.

The Panthers kept piling on the points in the second quarter. Perry capped a drive that started on the Bunker Hill 44 with a 7-yard TD run that, with Bryson’s PAT, made the score 30-0. Hibriten struck again with 6:21 left in the half thanks to a 5-yard TD run by Cedric Shuford. Bryson’s kick gave the Panthers a 37-0 lead they would take into the locker room at halftime.

The third quarter started with another three-and-out by the Bears, and Hibriten took over at its own 35 for its first possession of the period. Isbell rumbled for 11 yards on first down, and Perry took off on a quarterback keeper for 34 of his 122 rushing yards on the night. He followed that run up with a 20-yard scoring scamper, but a holding call negated the touchdown and gave the Panthers first and 16 from the Bears’ 26. On the very next play, Shuford found the end zone on a 26-yard run that put Hibriten up 43-0 and started the continuously running clock.

Backup quarterback Coby Wilson scored on a 10-yard keeper on the first play of the fourth quarter to put Hibriten up 50-0, and Bunker Hill finally started moving the ball once the Panthers’ got some much-needed playing time for their backups. The Bears got on the board with 4:37 to play, and they added another score with 5.2 seconds left to make the final count 50-13.

The Panthers host West Caldwell on Friday for the annual Black and Blue Game. The Warriors were scheduled to visit East Burke for their season opener Friday night.