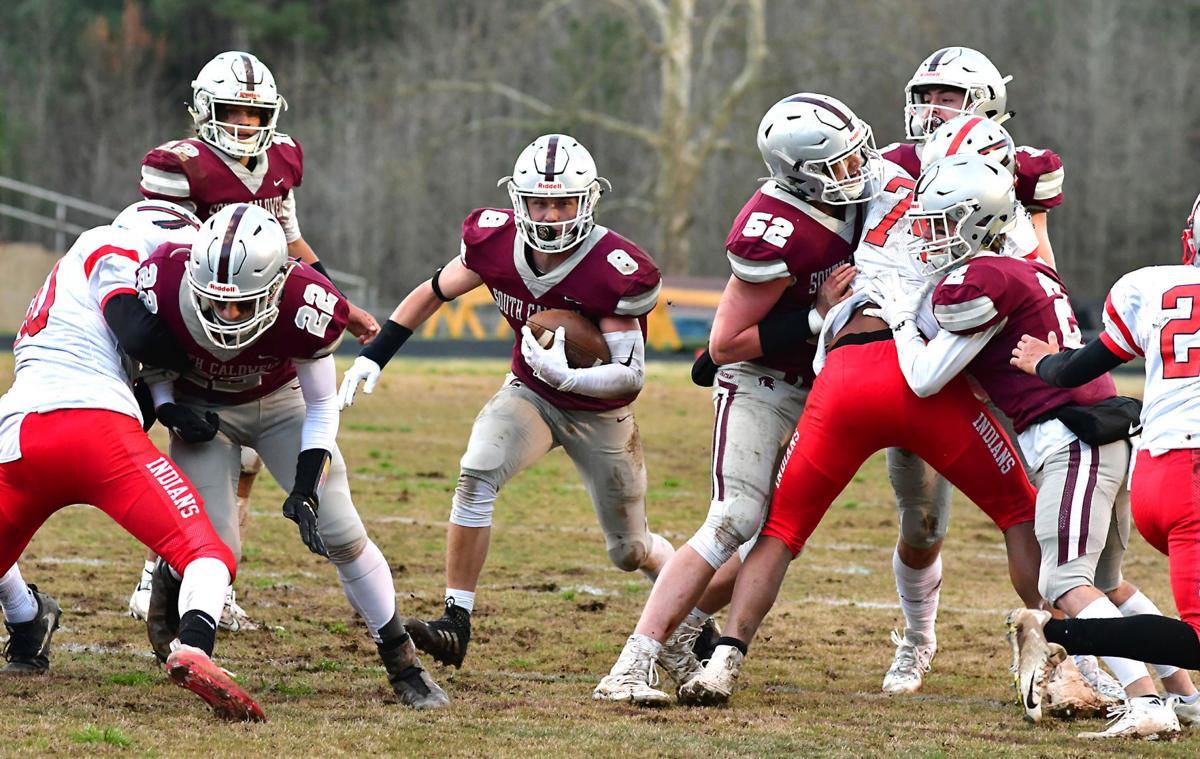 South Caldwell’s Isaiah Kirby (8) looks straight into a gap in the St. Stephens’ defense during Thursday night’s game in Sawmills. Kirby found several gaps as he rushed for 140 yards and a pair of touchdowns. 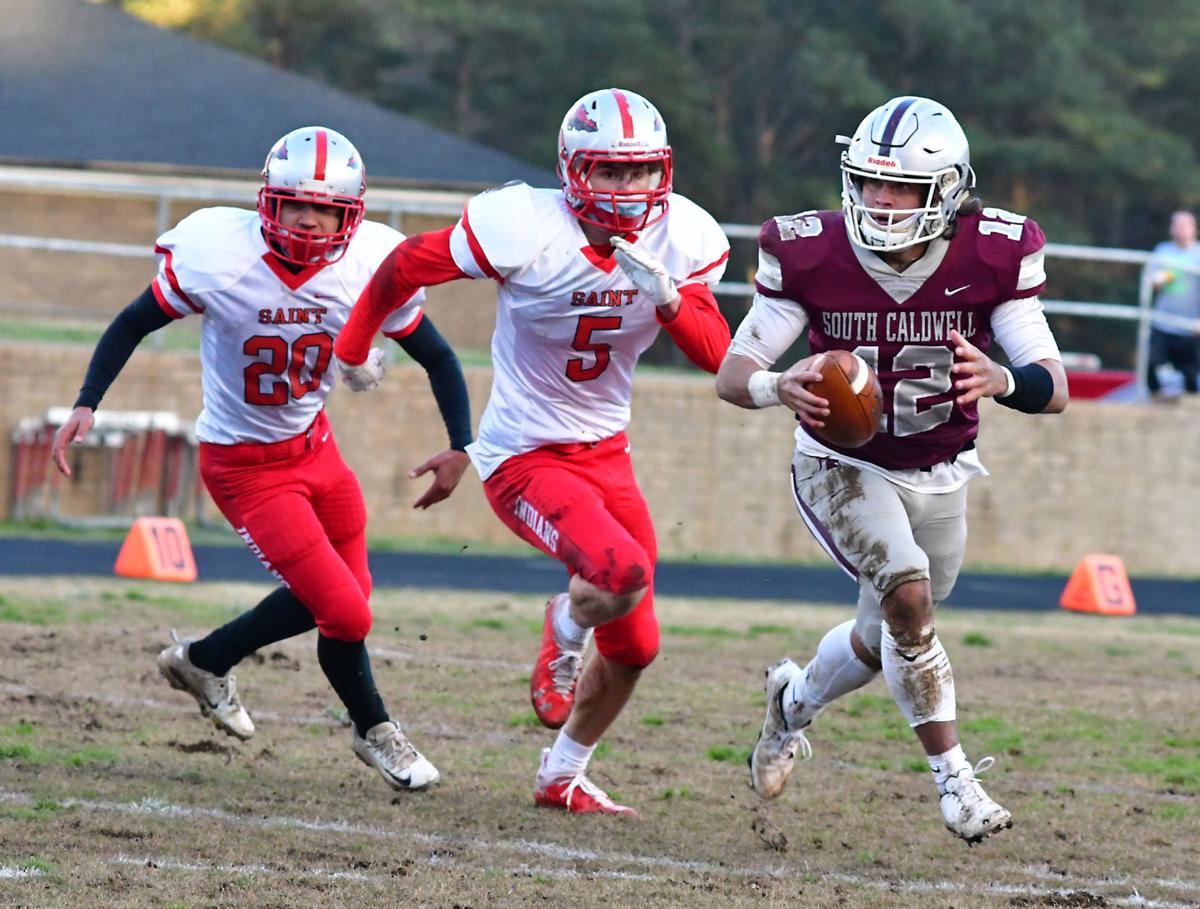 South Caldwell’s Avery Raynor (12) is chased out of the pocket by a pair of St. Stephens defenders. Raynor ran for 112 yards and three scores, and he returned a blocked punt for his fourth touchdown of the game. 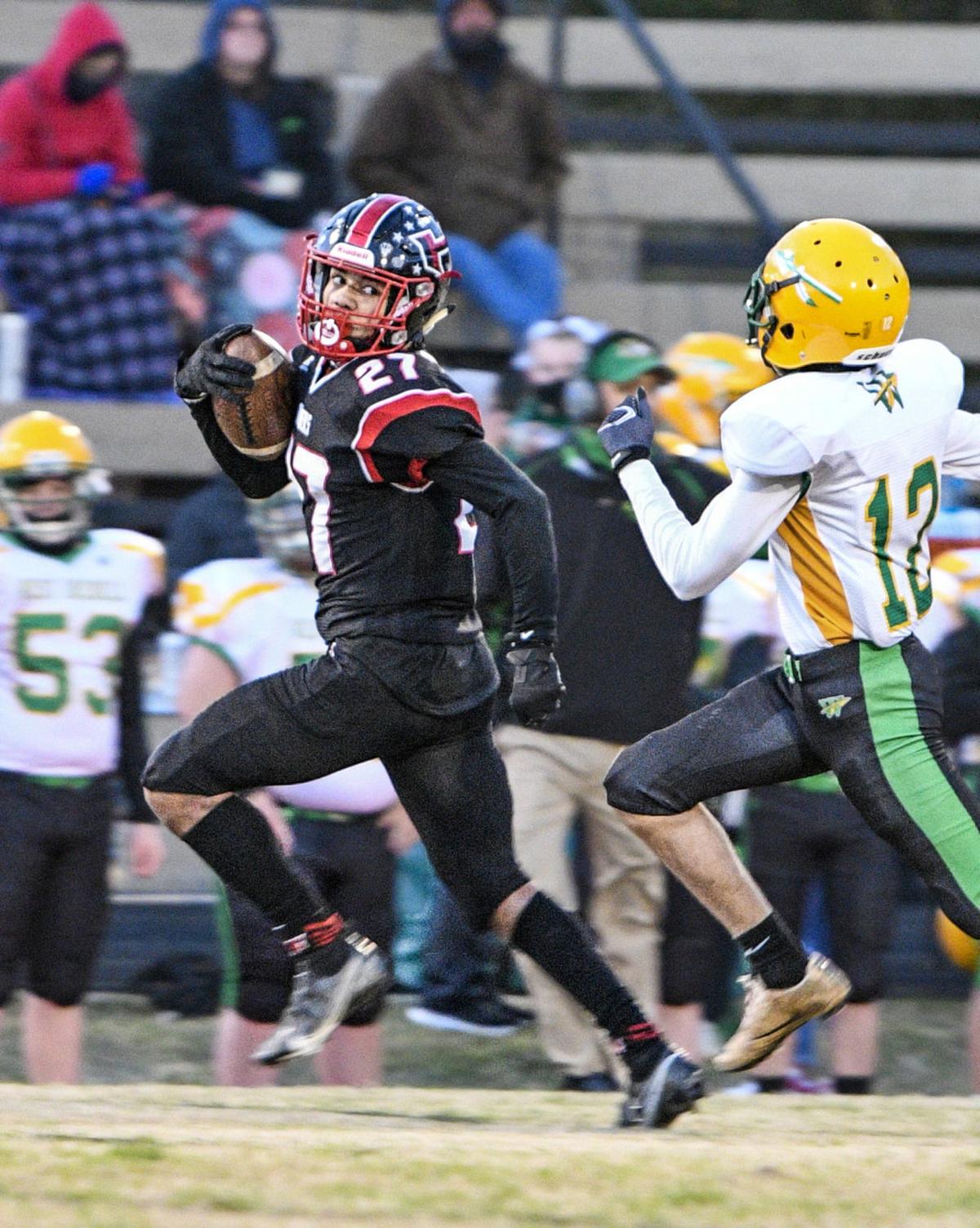 South Caldwell’s Isaiah Kirby (8) looks straight into a gap in the St. Stephens’ defense during Thursday night’s game in Sawmills. Kirby found several gaps as he rushed for 140 yards and a pair of touchdowns.

South Caldwell’s Avery Raynor (12) is chased out of the pocket by a pair of St. Stephens defenders. Raynor ran for 112 yards and three scores, and he returned a blocked punt for his fourth touchdown of the game.

SAWMILLS — South Caldwell’s held St. Stephens to 109 yards of total offense, 52 of which came on the Indians’ opening drive of the second half, as the Spartans won in dominant fashion 44-14.

St. Stephens had trouble finding the answer to South Caldwell’s rushing attack as Isaiah Kirby ran for 140 yards and two touchdowns, and Avery Raynor rushed for 112 yards and three TDs.

The Spartans (2-1, 2-0 Northwestern 3A/4A) took the opening kickoff and drove 64 yards in nine plays, chewing time off the clock as they did so. The drive culminated in Raynor’s first scoring run of the game, a 13-yarder that put South Caldwell up 6-0 after the Spartans’ two-point try was stuffed by the Indians.

After holding St. Stephens to a three-and-out and nearly blocking the Indians’ punt, the Spartans took over near midfield and embarked on another nine-play drive covering 52 yards that gave South Caldwell a two-touchdown lead. The two-point pass fell incomplete, and the Spartans led 12-0.

After exchanging possessions, the Spartans’ defense stepped up as Kaleb Icenhour picked off a St. Stephens pass and gave South Caldwell the ball at the Indians’ 34. Seven plays later, Raynor stepped in for his third score of the game, this time from two yards out, and Steven Reid caught the two-point pass from Raynor to put South Caldwell out front 20-0, which is where the score would stand at halftime.

The Indians (1-4) showed signs of life on their opening drive of the second half, covering 52 yards in four plays as Zane McPherson hit Michael Watson on a 25-yard TD pass that cut the Spartans’ lead to 13 at 20-7.

Enter Kirby and the Spartans’ defense.

Kirby answered St. Stephens’ scoring drive with a 43-yard TD run, and he got another score on South Caldwell’s next possession — this one from 21 yards out after the Spartans held the Indians on fourth and 2 from the 50.

After coming close to a block on the Indians’ first punt of the night, the Spartans got there on St. Stephens’ second punt. Cole McCall pushed straight up the middle and blocked the punt, and Raynor scooped it up and returned it 20 yards for a touchdown — his fourth score of the game — and the two-point conversion put South Caldwell up 44-7 late in the third quarter.

The Indians scored the final points of the game on a 45-yard fumble return by Omar Orazco, and South Caldwell ran out the clock after taking over at midfield.

The Spartans will head over to Taylorsville on Friday to close out the regular season at Alexander Central, a 48-0 winner over Hickory on Thursday.

Hibriten pitched its third shutout of the season and improved to 6-0 with a dominant win over West Iredell. The Panthers had two defensive touchdowns — a 26-yard fumble return by Dillon Earp and a 50-yard interception return by Quaidyn “Duder” Tugman — and got two touchdowns from Daren Perry as Hibriten raced out to a 50-0 halftime lead.

Noah Isbell had an 18-yard TD run, and Jackson Lewis scored from six yards out. Jake Absher had a 2-yard TD run and fumble recovery.

The Panthers close out the regular season on Friday at Patton (1-5).

In other action Thursday night, Draughn topped West Caldwell 21-7, dealing a significant blow to the Warriors’ playoff hopes. No other information was available.

Hibriten has the top spot locked up, and Bunker Hill (5-1) is a game ahead of East Burke and Draughn, both of which are 4-2 and a game ahead of West Caldwell (3-3). The Cavaliers and Wildcats face off on Friday, while the Warriors host Bunker Hill to close out the regular season.