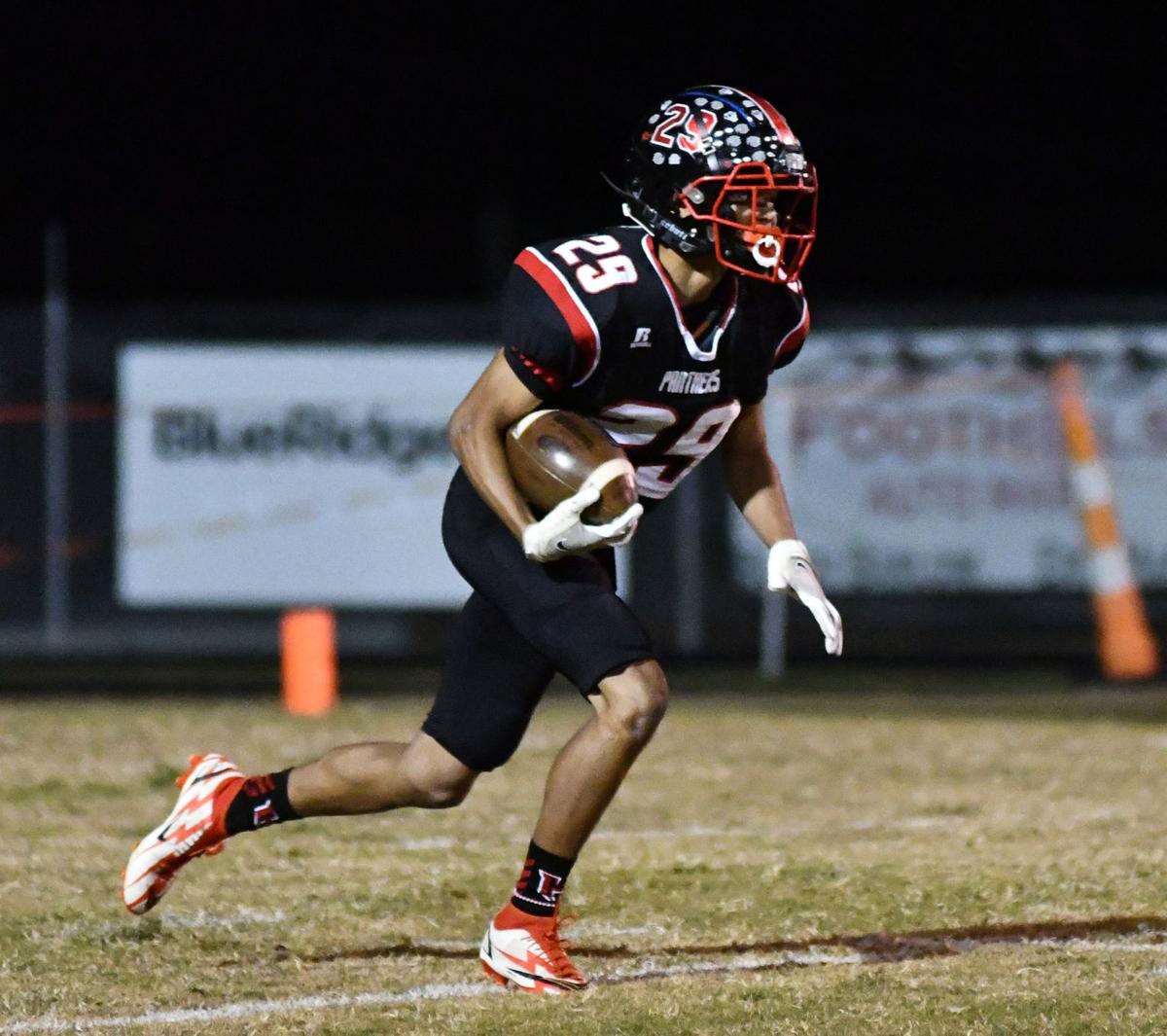 Hibriten’s Jabee Powell has emerged as the Panthers’ main playmaker since the injury to Duder Tugman. Powell is a threat to go the distance whenever he gets the ball in his hands. 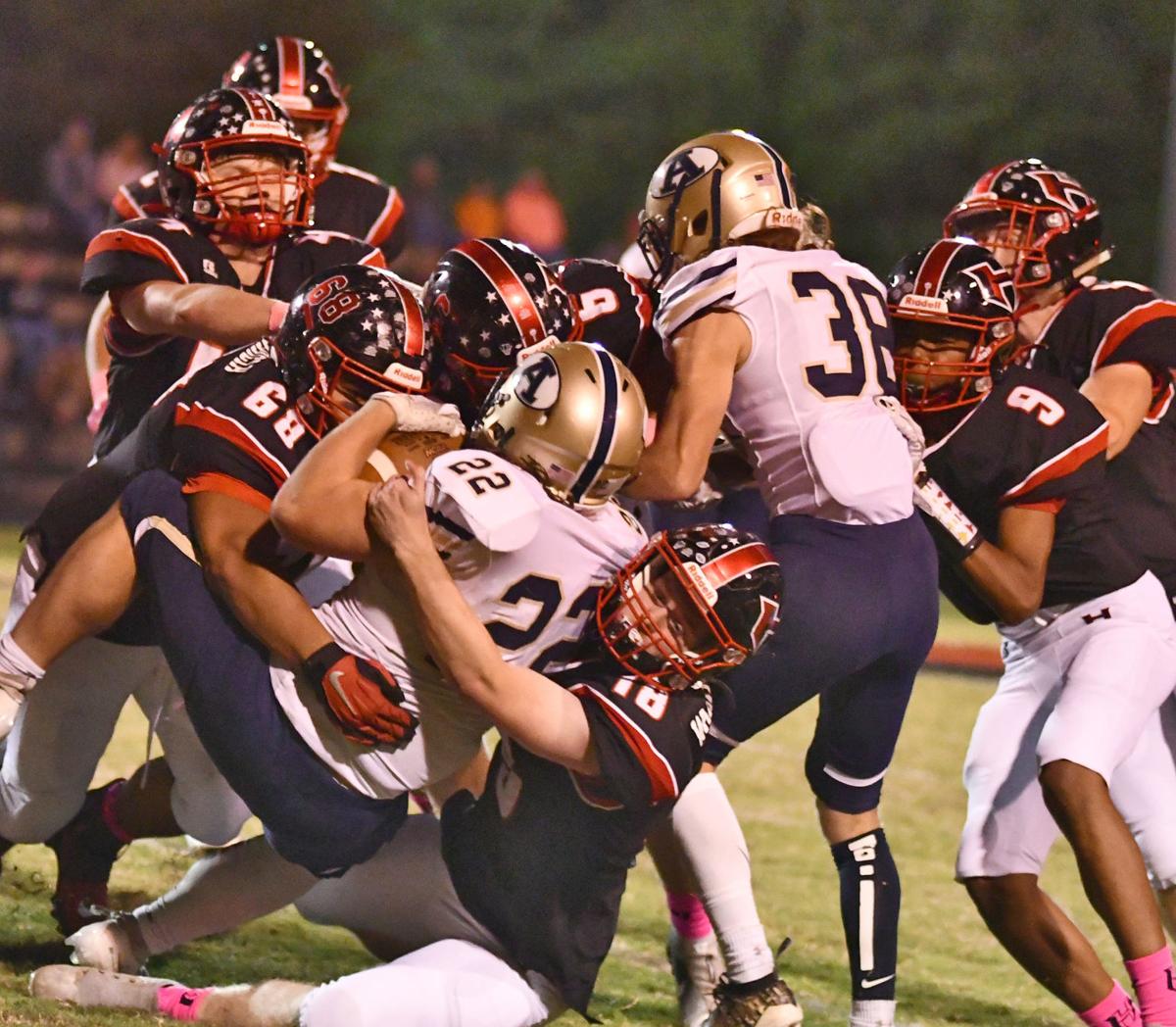 Hibriten’s defense, shown here in action against Alexander Central, has a tendency to stiffen up as opponents get near the end zone. The Panthers forced a Freedom fumble last week with the Patriots on the Hibriten 5-yard line. 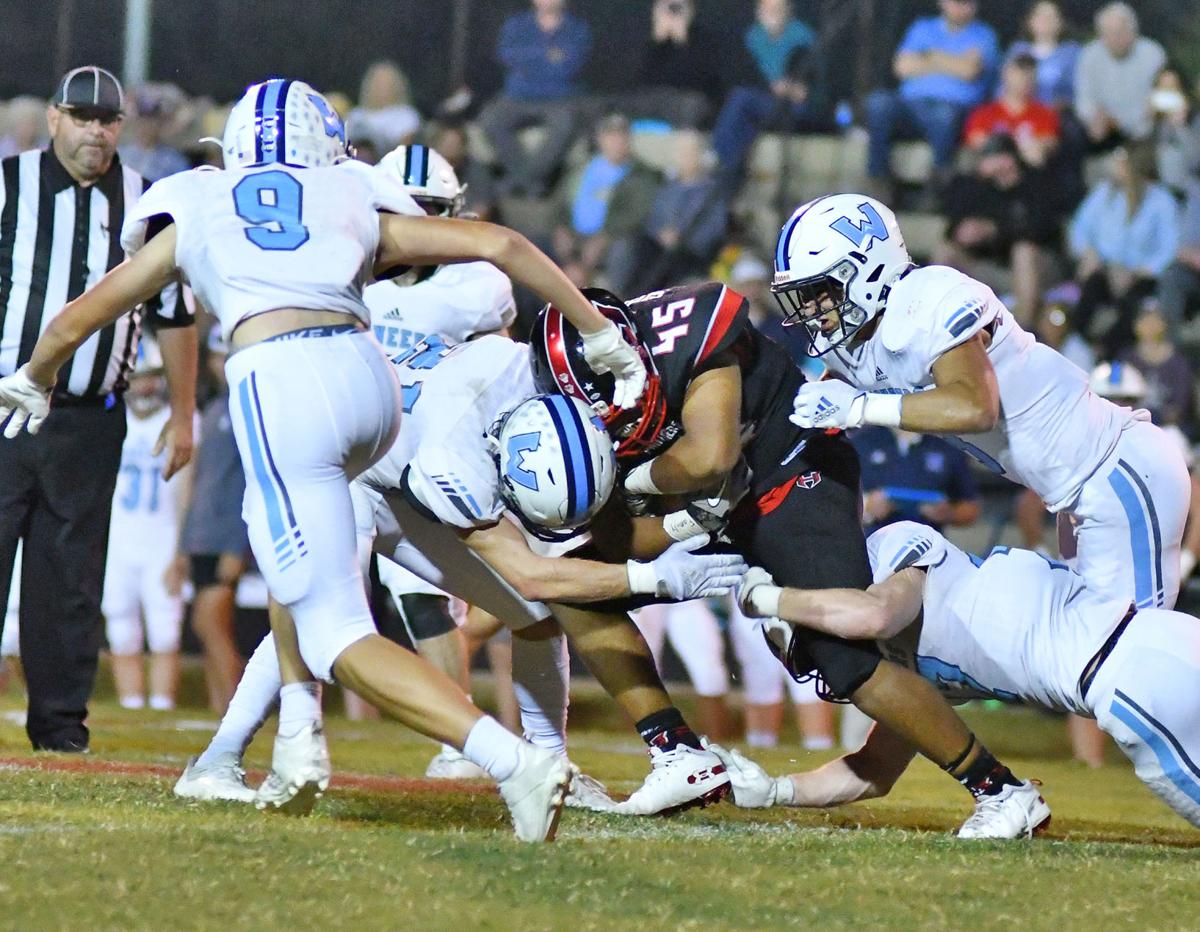 Hibriten’s Gabe Suddreth (45) is a huge part of the Panthers’ inside running game and ball-control philosophy.

Hibriten’s Jabee Powell has emerged as the Panthers’ main playmaker since the injury to Duder Tugman. Powell is a threat to go the distance whenever he gets the ball in his hands.

Hibriten’s defense, shown here in action against Alexander Central, has a tendency to stiffen up as opponents get near the end zone. The Panthers forced a Freedom fumble last week with the Patriots on the Hibriten 5-yard line.

Hibriten’s Gabe Suddreth (45) is a huge part of the Panthers’ inside running game and ball-control philosophy.

When 10th-seeded Concord comes to town tonight to face No. 7 Hibriten in the second round of the 3A playoffs, one thing is for certain — the Spiders are going to run the football.

Concord, which had won four games total in the previous three seasons and started this season 0-2 before winning six in a row, piled up 440 yards on offense last week in its 34-14 first-round win over Tuscola, and all of it came on the ground. The Spiders (7-3) got a 71-yard touchdown run from Ny’lon Fair-Steele and a 46-yard TD run by Keveus Phillips, who finished the game with 114 yards. Concord also had a 96-yard performance from Kadin Presutti.

According to the Concord Independent-Tribune, six different Spiders had at least 40 yards rushing, and defensive lineman Elijah Smith scored from 44 yards out on a fake punt.

Making its first playoff appearance since 2017 and winning its first playoff game since 2015, Concord, which forced six turnovers last week against the Mountaineers, has defensive linemen who can get after the quarterback, linebackers who like to hit and ball-hawking defensive backs who, as I-T Sports Editor C. Jemal Horton wrote last week, think any 50-50 ball is theirs. The Spiders’ defense is pretty stingy on the scoreboard, as well, allowing only 184 points all season — 47 of which came in Kannapolis’ 47-0 win over Concord in the regular-season finale for both teams. Conversely, Hibriten has embraced the grind on both sides of the ball.

The Panthers (7-3) have battering rams Gabe Suddreth and Dillan Earp to get the tough yards between the tackles, while quarterback Coby Wilson and running backs Sadharri Moore and Jabee Powell are the outside runners in Hibriten’s option attack. Both Moore and Powell are capable of going the distance anytime they touch the ball, and Powell is also Wilson’s top receiving threat. In the absence of playmaker Duder Tugman, who suffered a lower-leg injury against Alexander Central, Powell has emerged as Hibriten’s big-play guy.

Hibriten has had two 95-yard-plus scoring drives in its last three games and likes to shorten the game by milking the play clock and pounding away at the center of the defense with body blow after body blow before working outside with the option.

Defensively, the Panthers have a mindset of bend but don’t break. They find ways to force teams into third- and fourth-down situations, especially in the red zone. One potentially troublesome area is Hibriten’s third-down defense.

The trend this season is teams have been able to convert on third and long, but the Panthers seem to stiffen up when their backs are against their own goal line.

In their first-round win against Freedom, the Panthers forced a fumble at their own 5-yard line, which the offense took the length of the field. Later in the game, Hibriten forced Freedom to settle for a field goal on fourth and goal from the Panthers’ 9, which Hibriten blocked but was picked up by a Freedom player who scored a touchdown right before halftime.

The key for Hibriten’s offense this week is to avoid the first-drive turnover, especially against a Concord defense that has shown it’s capable of forcing turnovers in bunches. On the other side of the ball, the Panthers have to avoid being gouged up the middle and stay away from drive-extending penalties.

Steven M. Sipple: It all feels far too predictable as Nebraska falters late in season finale

Your Report Card: Iowa vs. Nebraska

The winner of tonight’s game faces the winner of No. 2 Statesville and No. 18 East Lincoln, both of which play in the Western Foothills Athletic Conference. The 10-0 Greyhounds beat the Mustangs 23-6 on Sept. 24 and rolled No. 31 Enka 49-0 last week.

Toyaz Soloman led the Cobras with 20 points, followed by Charles Bryson with 12 and Shawn Nelson 11.

The Cobras return to action on Nov. 19 against Andrews College at South Georgia State College, while Catawba Valley hosts Johnston on Nov. 20.

Helms ‘day to day’ after injury