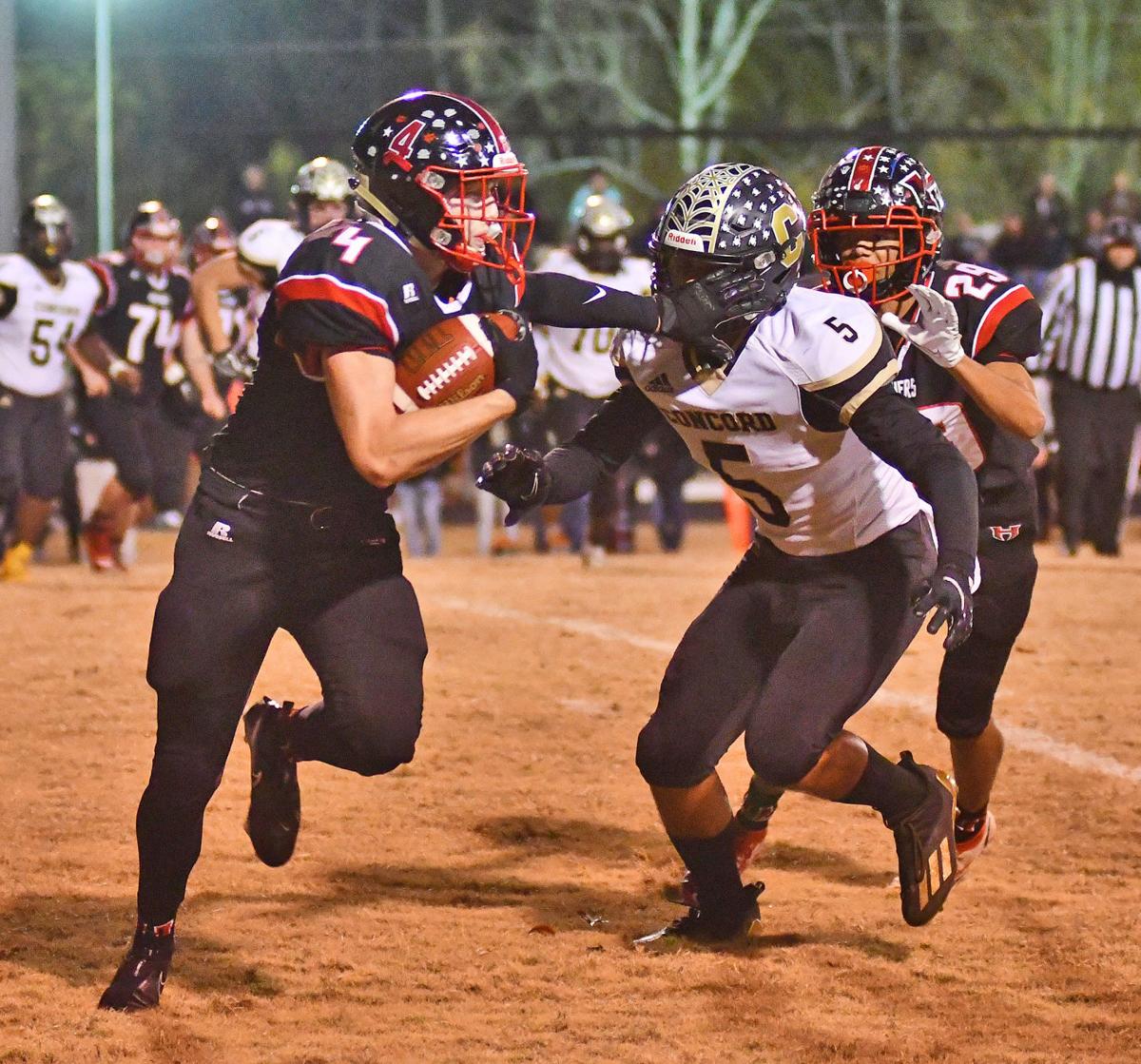 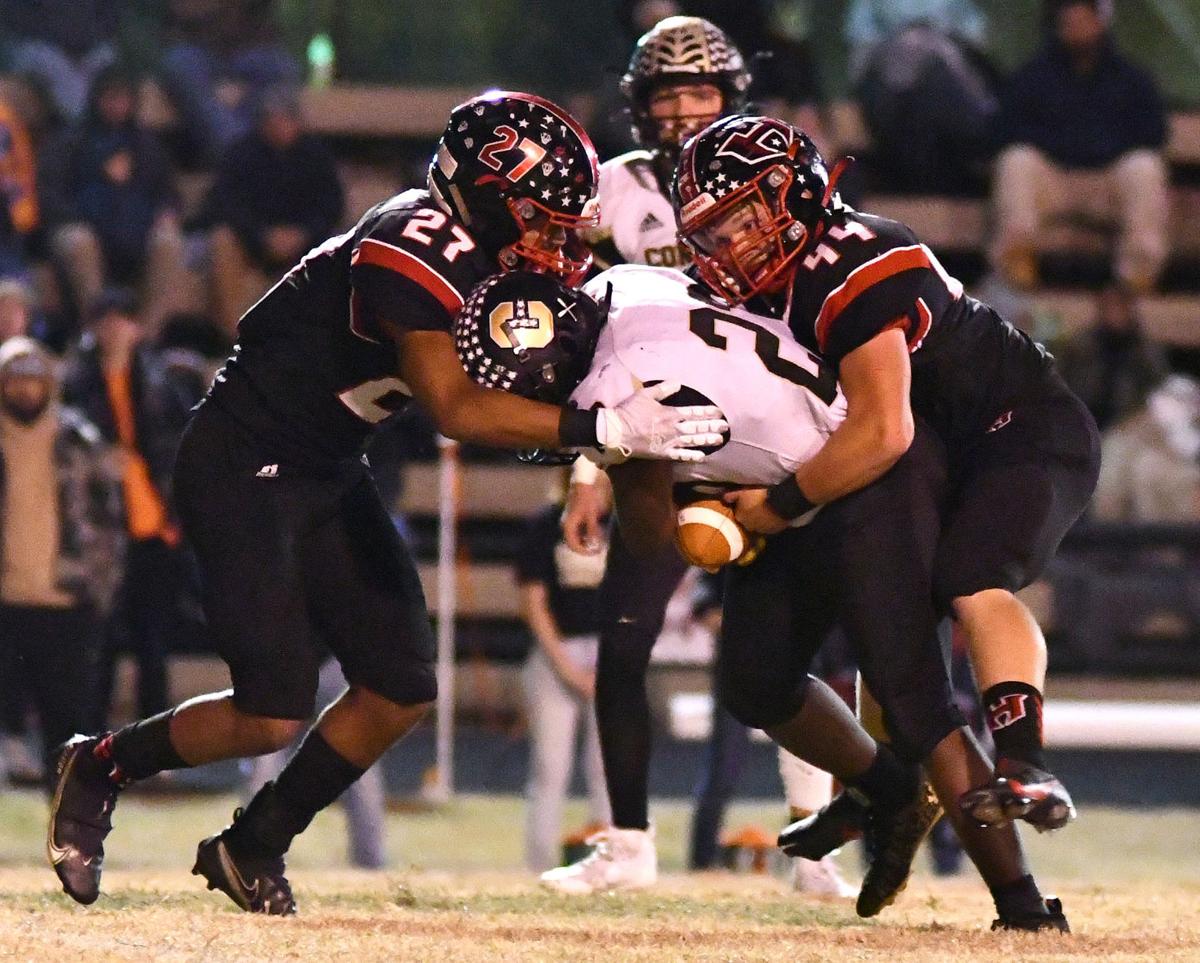 Hibriten’s Duder Tugman (27) and Dillon Earp (44) tackle Concord’s Keveus Phillips (23). The Panthers’ defense forced six Concord turnovers on Friday — five fumbles and a key interception at the end of the first half.

Hibriten’s Duder Tugman (27) and Dillon Earp (44) tackle Concord’s Keveus Phillips (23). The Panthers’ defense forced six Concord turnovers on Friday — five fumbles and a key interception at the end of the first half.

Hibriten forced six Concord turnovers and overcame four of its own to advance to the third round of the 3A football playoffs with a 27-14 win Friday over the Spiders.

The Panthers’ defense put forth one of its best efforts of the season against the 10th-seeded Spiders, who piled up 440 yards rushing against Tuscola in their first-round matchup. Hibriten jumped out to a 21-0 lead and held on for dear life against a Concord team that just wouldn’t go away.

“I felt going in that we had a great defensive game play,” said Hibriten coach Sam Mackey. “Our kids are getting better and better each week, and that happens the more you play. The more you keep winning, the more chances you have to get better.”

The game started with Hibriten firing on all cylinders.

The No. 7-seeded Panthers took the opening kickoff and drove 64 yards in eight plays with Dillan Earp capping the march with a 27-yard touchdown run. Earp broke free up the left side of the Panthers’ formation and outran everyone to the end zone. Trenton Cornett’s point-after gave Hibriten a 7-0 lead with 7:22 left in the first quarter.

In keeping with its recent theme, the Hibriten defense bent all the way back to its 13, but the Spiders weren’t able to break through as the Panthers held Concord on 4th and 9 from the Panthers 13.

After holding Hibriten to a three and out, the Spiders put the ball on the ground on the first play of its second offensive series, and Hibriten took over at its own 25. Six plays later, the Panthers led 13-0 on a 1-yard TD plunge by Coby Wilson, and Cornett’s second PAT of the night put Hibriten up 14-0 with 10:20 left until halftime. The 75-yard drive was keyed by a 52-yard run by Duder Tugman, who returned to the lineup after missing three weeks with a foot injury.

The Panthers (8-3) struck again with six minutes left in the half when Wilson hooked up with Jabee Powell for a 40-yard scoring strike that put Hibriten up 21-0, and it looked like the rout was on.

Concord had other ideas, however.

The Spiders, whose season ends with a mark of 7-4, scored on a 49-yard lateral from quarterback Zach Jenkins to Kaiden Prusetti to cut Hibriten’s lead to 21-7 with 1:47 left in the half. The Spiders, who were to receive the second-half kickoff, got the ball back on a Hibriten punt with 27.3 seconds left in the half, and Jenkins immediately hit Prusetti with a 58-yard completion that put Concord on the Hibriten 13. Two plays later, Jenkins had an open receiver in the corner of the end zone and threw the ball his way, but freshman Miguel Morales came up with what might’ve been the play of the game when he intercepted Jenkins’ pass and ran out the clock on his return.

Missouri consistent only in its inconsistency as it struggles against Arkansas

The first three possessions of the third quarter ended with fumbles recovered by the other team. Concord’s opening drive of the second half ended near midfield with a fumble, and the Panthers returned the favor after driving inside the Concord 5. The Spiders fumbled again, and Matt Warhurst recovered for Hibriten at the Panthers 40. After Wilson broke free for 49 yards to get to the Concord 20, the drive bogged down, and Hibriten turned the ball over on downs thanks to a stellar defensive play by a Concord defensive back who knocked Wilson’s fourth-down pass away from receiver Davey Shore in the end zone.

The two teams traded fumbles again to open the fourth quarter with Hibriten clinging to a 21-7 lead, but the Spiders finally scored their second TD of the game on a 5-yard run by Ny’lon Fair-Steele that cut the Panthers’ lead to 21-14 with 7:07 remaining in the game.

The Spiders had life after forcing a Hibriten punt with less than four minutes left in the game and had 3rd and 2 from their own 39, but the ball was jarred loose from Jenkins by a Panthers defender. It bounced around and rolled all the way back to the 12 where Powell picked it up and sealed the game with a fumble return for a touchdown and a 27-14 lead after Concord blocked the extra point.

The game ended with a good deal of ugliness when Jenkins was hammered on a clean hit just as he threw the ball, and the Hibriten defender was blindsided by a Concord player, who then hit the defender again. With 27.2 seconds left in the game, Concord coach Marty Paxton called for the game to end there.

Mackey said after the game that he felt like Hibriten’s defense had an advantage on Concord after seeing heavy doses of run in the last month of the season, and Hibriten will see something it hasn’t seen since it faced SouthLake Christian — a wide-open spread offense as the seventh-seeded Panthers head to No. 2 Statesville (11-0), which defeated East Lincoln 42-3 on Friday.

The Greyhounds have scored 442 points this season (40.2 points per game) and have allowed a paltry 92 points (8.4 ppg) — 30 of which came in their season opener against Carson. In two playoff games, Statesville has outscored its opposition 81-3.

The Panthers have had a bit of a chip on their shoulders all season long after hearing doubters and naysayers speak up after moving to 3A after dominating 2A for nearly a decade. The chip keeps growing, and as Hibriten continues to advance, Mackey is OK with that.

“Our kids want this — honestly, they just want to prove people wrong,” he said. “We’ve had so many people just doubt us and nobody expected us to be where we’re at.”

The winner of Friday’s Sweet 16 matchup in Greyhound Hollow will face either No. 3 Greensboro Dudley or No. 11 Kings Mountain. If the Panthers and Mountaineers both upset their highly seeded opponents, Hibriten will host the 3A West regional semifinal on Nov. 26, the day after Thanksgiving.